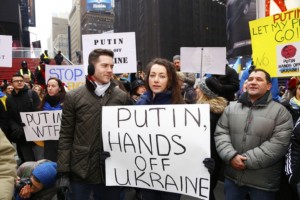 The Ukrainian government official gives a me a look full of the kind of cynicism built up from a life battling in the political arena. He hesitates before answering my question, asking him whether Ukraine is poised to become the “Silicon Valley of Eastern Europe.”

That was part of the theme at an event last week held at the Ukrainian Institute of America, housed within the magnificent Harry F. Sinclair House on Fifth Avenue: the potential for Ukraine to become the IT outsourcing center of Europe. A panel of Ukrainian government officials and business people touted the potential of the country, with its thousands of information technology workers trained at technical schools throughout Ukraine.

The event was part of the Embassy of Ukraine in the United States’ campaign to attract Western companies to make use of its IT talent, a low tax rate and significant savings compared to other regions.

Looming over the event, and touched on by each speaker, was the conflict with Russia. Despite several speakers’ assurances of an imminent political resolution, the government official I cornered during the cocktail reception had a different view.

He declined to let me use his name, but was happy to dispel any idea that Ukraine’s economy can get on track without an end of the hostilities between the two countries.

The aging official’s opinion was the most pessimistic I heard at the event, but everyone I spoke to agreed the conflict needed to end before the Ukraine could hope to attract foreign business.

Several sources had high hopes for the president-elect Petro Poroshenko, who was elected in May and will be inaugurated June 7. Poroshenko is seen as friendly to business, with a vision to transform the Ukrainian economy, according to several people at the event, though his critics peg him as just another greedy oligarch.

IT outsourcing has been growing in Ukraine. The 2013 volume of IT outsourcing to Ukraine has exceeded $1.5 billion, according to a website dedicated to the Ukrainian embassy’s campaign (whose slogan is, “Support Democracy. Increase Your Profits. Cloudsource to Ukraine.”) Companies that outsource to Ukraine include Siemens, GlaxoSmithKline, PhilipMorris, IBM, HP, Motorola and Tupperware, among many others.

According to Ukrainian embassy numbers, there are around 230,000 IT professionals in the country, with more than 30,000 graduating in the IT field from schools every year, according to the embassy campaign’s website.

EPAM Systems, a software services company backed by Siguler Guff & Co, has operations in Ukraine, which it entered in 2005. Anthony Conte, EPAM’s chief financial officer who spoke at the event, said Ukraine was the company’s fastest growing region. Today, the company has just more than 3,000 employees in Ukraine, including about 2,700 IT professionals, he said.

“The quality of the person we’re getting to work for us [in Ukraine] has been outstanding. Our productivity measures have been off the charts in Ukraine,” Conte said.

Opportunities exist for investment managers as well as big business. The uncertainty surrounding Ukraine actually could play to the advantage of certain firms that know the market and have been through volatility, according to Gregory Bedrosian, chief executive and managing partner of investment banking boutique Redwood Capital.

“Those groups involved in the market are seeing this as an interesting opportunity, valuation wise, given the uncertainty, to step in and fund businesses that, three or four years from now, they’ll look like geniuses,” Bedrosian said. “Invest now while there are fewer people looking around and focusing.”

Ultimately, the crisis will die down, and some compromise will be reached, according to Anthony Volman, managing director of management consulting firm Suisse Capital Management. Volman said the true story behind the conflict in Ukraine is a power struggle between the United States and Russia, both of which are trying to pull Ukraine into their sphere of influence.

The new president appears to be acceptable to Moscow, as well as the European Union, which should mean some sort of resolution to this crisis. If and when that happens, Ukraine can get back to the business of rebuilding its economy.