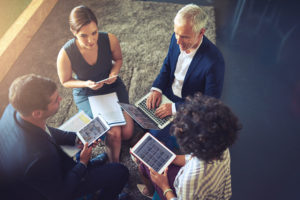 Red River is an IT services provider that helps its clients solve issues related to data center management, security, analytics, networking, collaboration, mobility and cloud. The company serves both commercial clients and government agencies. According to a company announcement from September, Red River’s federal contract portfolio was previously valued at over $120 billion.

New era: A merger rumored in the works since at least last fall has finally materialized. L Catterton-backed PatientPoint has joined forces with Littlejohn & Co’s Outcome Health, valuing what is now PatientPoint Health Technologies well in excess of $1 billion, according to sources with knowledge of the deal.

The deal effectively unites the two largest tech-enabled players selling educational content and advertisements in physician offices, exam and waiting rooms – giving pharmaceutical and other healthcare companies access to patients at the point-of-care.

Both companies have an interesting history. PatientPoint ran a formal sale process a couple years back, fielding bids from a broad range of financial and strategic bidders over a several-month period, sources previously said, and even entered into conversations with a SPAC in late 2019 (before SPACs were the coolest next thing), PE Hub wrote.

Meanwhile, Outcome Health – a promising startup that only a few years ago reported a $5.5 billion valuation following an investment from Alphabet’s growth-equity fund, Pritzker Group and Goldman Sachs – has been working to recover from a troubled past involving allegations of fraud and the ousting of its CEO.

The interesting question that surfaces now: how will the company, now that it’s achieved dominant market scale, position itself? As a healthcare media company, or tech company? What kind of deals will it go after, or on the flip side, will the combination soon emerge as an attractive acquisition target? Although Littlejohn’s investment was in 2019, L Catterton, after all, has been an investor since 2007.

Check out my story on PE Hub for more financials and info on the deal.

That’s it for today! As always, hit me up with any deal tips, people news or general feedback at springle@buyoutsinsider.com.