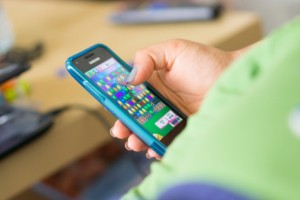 ABS Partners CV, a unit of Activision Blizzard, will acquire King shares for $18 each in cash, representing a premium of 16 percent to King’s closing price on Monday.

The addition of King’s mobile games will position Activision as a global leader in interactive entertainment across mobile, console and PC platforms, Activision said in a statement.

Video game publishers are shifting to the lucrative digital business from physical sales of games as consumers shift from consoles to playing on smartphones and tablets.

The fast-growing mobile gaming segment is expected to generate more than $36 billion in revenue by the end of 2015, according to Activision.

Activision Blizzard Chief Executive Bobby Kotick told Reuters that buying King will help broaden the reach of its games and expand into new demographics, adding that 60 percent of King’s players are female and that no gaming consoles or hardware, besides a phone, is needed to play King’s games.

“You have such broad reach. This is a fantastic opportunity for us to create compelling content for new demographics,” Kotick said.

Activision, which owns popular game franchises such as “World of Warcraft,” “Call of Duty,” and “Diablo,” said the deal gives the combined company more than 500 million monthly active users across the world and would add to Activision’s estimated 2016 adjusted revenue and earnings by about 30 percent.

Dublin, Ireland-based King will continue to operate as an independent operating unit led by Chief Executive Riccardo Zacconi. Zacconi told Reuters that Activision appealed to him because of the company’s expertise in building long-lasting franchises.

King, which went public last March, has been struggling to boost bookings – an indicator of future revenue.

The deal, expected to be completed by spring 2016, is subject to approval by King’s shareholders and the Irish High Court, and clearances by antitrust authorities.

Activision said it will use $3.6 billion of offshore cash and borrow the rest from Bank of America Merrill Lynch and Goldman Sachs Bank as incremental lenders.

Activision also reported third-quarter earnings of 17 cents per share, compared with a loss of 3 cents a year earlier. Excluding items, it earned 21 cents per share. Revenue rose 31 percent to $990 million. Analysts had expected earnings of 15 cents a share, on revenue of $950.4 million.

(Reporting by Supriya Kurane in Bengaluru and Liana Baker in New York; Editing by Gopakumar Warrier)