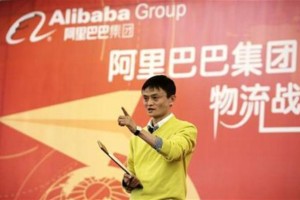 Global equity capital markets returned with a vengeance in 2014 as bankers, investors and companies led a charge that culminated spectacularly in Alibaba, the biggest share listing ever.

Worldwide equity capital market (ECM) deals, from flotations to rights issues, totalled $678.1 billion in the first nine months of 2014, a quarter more than the same period of 2013 and the highest since 2007, according to Thomson Reuters data.

Companies around the world cashed in on strong investor demand and European deals jumped by more than half, hitting the highest level since records began in 1980.

Initial public offerings (IPOs) in particular stole the limelight, almost doubling from the same period in 2013 to hit $176.1 billion worldwide.

The long-awaited Alibaba flotation finally landed in September, whipping up a frenzy as everyone from founder Jack Ma to kung fu star Jet Li descended on the New York Stock Exchange to watch the e-commerce giant’s stock rise 38 percent on its first day of trading.

The listing raised $25 billion after underwriters sold extra shares, and helped stock market listings across the Asia Pacific region more than triple to $69.5 billion so far this year.

Equity market deals were also buoyed by the resumption of listings in China after a hiatus of nearly a year and half, plus a surge in issuance in Hong Kong and Australia.

“It’s been a fantastic year for some of the banks, but revenue is skewed towards the tech sector and one jumbo transaction,” said Mervyn Chow, head of the global markets solutions group in Asia Pacific at Credit Suisse, one of five bookrunners for Alibaba’s record sale.

“This is a landmark deal in every aspect globally and provides very positive momentum and a textbook roadmap for other Chinese entrepreneurs looking to float,” he said. “It will allow other up-and-coming Internet companies to follow.”

Issuance in the region is expected to continue rising, with large offerings in Hong Kong, Thailand and Australia likely before the end of the year.

Share offers from technology, media and telecommunications firms may ease, but deals from others sectors, including healthcare, are expected from a wide range of issuers, Credit Suisse’s Chow and his European counterpart Nick Williams said.

“We would expect sponsors to account for a significant part of the pipeline, but we’re also expecting corporate spin-offs, spin-outs, and a wave of privatisations,” said Williams, head of European ECM at Credit Suisse.

European deals in 2014 have so far accounted for almost a third of global ECM issuance, rising 54 percent from 2013 to hit $220.3 billion, the highest level for the first nine months of any year since records began in 1980.

Following a glut of private equity-backed flotations, major corporate deals are emerging. German drugmaker Bayer announced this month plans to list its plastics division, worth up to 10 billion euros.

After a quiet first half, Frankfurt is listing multi-billion dollar Internet firms Rocket Internet and Zalando this quarter. Rocket even brought its offer forward a week citing “exceptional investor demand”.

In the United States, it was the best first nine months in a year since 2000 and activity does not look to be slowing anytime soon, with Alibaba whetting investor appetite for more deals.

“We were all expecting that Alibaba would fuel the market,” said Jackie Kelly, Americas IPO leader at Ernst & Young .

“In a large transaction investors don’t get to buy as much stock as they want. IPOs generally outperform the general market indices, which is what makes them so attractive. Investors are rushing for returns.” ($1 = 1.1480 Australian Dollars)