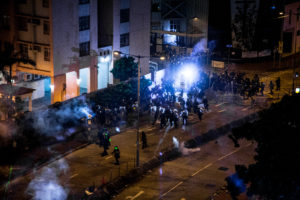 Hope your week is going well.

Yesterday we included some of a memo from Robert Smith, founder and CEO of Vista Equity, talking about his experiences with racism in America. TPG co-CEOs Jim Coulter and Jon Winkelried also wrote a firm-wide memo yesterday addressing the unrest across the US in the wake of the killing of George Floyd.

The memo said the two contributed to the NAACP Legal Defense Fund and the Vera Institute of Justice. They also partnered with the firm’s diversity and inclusion leaders and Black Professionals Employee Affinity Group to help focus efforts on race and the American justice system.

The memo also mentions something I think is important right now, as many of us sit back and watch the unrest unfold across American cities. “Most importantly, we ask that you all take the time and find the space to join the conversation and engage on the underlying issues. We are reminded of, and guided by, Thurgood Marshall’s words: ‘I wish I could say that racism and prejudice were only distant memories. We must dissent from indifference. We must dissent from the apathy. We must dissent from the fear, the hatred and the mistrust.'”

Read it here on LinkedIn.

Space: One of the great things to have happened in the past few years was the space launch Sunday that shot two American astronauts into orbit. They eventually docked with the International Space Station.

Today, aerospace-focused AE Industrial Partners announced the formation of a technology platform for designing and developing systems and electronics for nex-gen space architecture. AE formed the platform through its acquisition, also announced today, or Deep Space Systems, which supports the design, development, testing and operations of advanced space systems, components and exploration spacecraft.

Big one: Ardian closed the largest fundraising platform ever raised with $19 billion for its eighth program. The fundraising total includes $5 billion for coinvestments. Capital came from 275 investors from nearly 40 countries.

Secondaries is going to play a big role in the recovery and emergence of GPs and companies from the downturn, according to Vincent Gombault, head of Ardian’s funds of funds business, said in a statement. “In the current environment, the secondaries market has a crucial role to play in providing institutional investors with liquidity. It is a vital tool for pension funds and investors in how they allocate investments in private equity … [Secondaries] is now a mature market which will only grow in importance for private equity investors in the years to come.”

LACERS board member Nilza Serrano ripped into the pensions small buyouts portfolio, asking why it was performing so poorly compared to larger funds, writes Justin Mitchell on Buyouts.

“It appears that small buyouts are doing really, really really bad compared to medium and large,” commissioner Serrano said to representatives of Aksia TorreyCove on May 26. “What kind of strategy are you proposing to kind of make that equal to the other two?”

Read the story here on Buyouts.