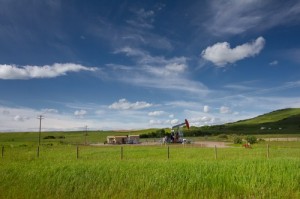 CALGARY, Sept. 10, 2013 /CNW/ – Bellatrix Exploration Ltd. (“Bellatrix” or the “Company”) (TSX, NYSE MKT: BXE) is pleased to announce that Grafton Energy Co I Ltd. (“Grafton”), has elected to exercise an option to increase its committed capital investment by an additional $100 million on the same terms and conditions as the previously announced joint venture (the “Joint Venture”) to accelerate development on a portion of Bellatrix’s extensive undeveloped land holdings.

The Joint Venture is in Willesden Green and Brazeau areas of West-Central Alberta. Under the terms of the amended agreement, Grafton will contribute 82%, or $200 million, to the $244 million Joint Venture to participate in an expected 58 Notikewin/Falher and Cardium well program. Under the agreement, Grafton will earn 54% of Bellatrix’s working interest in each well drilled in the well program until payout (being recovery of Grafton’s capital investment plus an 8% return) on the total program, reverting to 33% of Bellatrix’s working interest (“WI”) after payout. At any time after payout of the entire program, Grafton shall have the option to elect to convert all wells from the 33% WI to a 17.5% Gross Overriding Royalty (“GORR”) on Bellatrix’s pre-Joint Venture working interest. Grafton also has an additional one-time option within 12 months of the effective date to increase its exposure by an additional $50 million on the same terms and conditions. The effective date of the agreement is July 1, 2013 and has a term of 2 years. If the $50 million option is exercised, Bellatrix shall have until the end of the third anniversary of the effective date to spend the additional capital.

As a result of the Joint Venture and based on the initial funding commitment, Bellatrix’s updated net capital expenditure plan for 2013 is expected to be approximately $240 million, not including Grafton capital. Based on the timing of proposed expenditures in the latter half of 2013, completion of anticipated infrastructure and normal production declines, execution of the updated 2013 capital expenditure plan is expected to provide average daily production of 23,000 to 24,000 boe/d and 2013 exit rate of 30,000 to 31,000 boe/d.

The Company’s updated corporate presentation is available at www.bellatrixexploration.com.

Bellatrix Exploration Ltd. is a Western Canadian based growth oriented oil and gas company engaged in the exploration for, and the acquisition, development and production of oil and natural gas reserves in the provinces of Alberta, British Columbia and Saskatchewan. Common shares and convertible debentures of Bellatrix trade on the Toronto Stock Exchange (“TSX”) under the symbols BXE and BXE.DB.A, respectively and the common shares of Bellatrix trade on the NYSE MKT under the symbol BXE.

All amounts in this press release are in Canadian dollars unless otherwise identified.

Forward looking statements: Certain information set forth in this news release, including management’s assessments of the future plans and operations including anticipated 2013 average daily production and exit rate and 2013 capital expenditure budget may contain forward-looking statements, and necessarily involve risks and uncertainties, certain of which are beyond Bellatrix’s control, including risks related to satisfaction of conditions precedent to the Joint Venture and related to closing thereof, risks associated with oil and gas exploration, development, exploitation, production, marketing and transportation, loss of markets and other economic and industry conditions, volatility of commodity prices, currency fluctuations, imprecision of reserve estimates, environmental risks, competition from other producers, inability to retain drilling services, incorrect assessment of value of acquisitions and failure to realize the benefits therefrom, delays resulting from or inability to obtain required regulatory approvals, the lack of availability of qualified personnel or management, stock market volatility and ability to access sufficient capital from internal and external sources and economic or industry condition changes. Actual results, performance or achievements could differ materially from those expressed in, or implied by, these forward-looking statements and, accordingly, no assurance can be given that any events anticipated by the forward-looking statements will transpire or occur, or if any of them do so, what benefits that Bellatrix will derive therefrom. Additional information on these and other factors that could affect Bellatrix are included in reports on file with Canadian securities regulatory authorities and the United States Securities and Exchange Commission and may be accessed through the SEDAR website (www.sedar.com), the SEC’s website (www.sec.gov) or at Bellatrix’s website www.bellatrixexploration.com. Furthermore, the forward-looking statements contained in this news release are made as of the date of this news release, and Bellatrix does not undertake any obligation to update publicly or to revise any of the included forward looking statements, whether as a result of new information, future events or otherwise, except as may be expressly required by applicable securities law.

Conversion: The term barrels of oil equivalent (“boe”) may be misleading, particularly if used in isolation. A boe conversion ratio of six thousand cubic feet of natural gas to one barrel of oil equivalent (6 mcf/bbl) is based on an energy equivalency conversion method primarily applicable at the burner tip and does not represent a value equivalency at the wellhead. Given that the value ratio based on the current price of crude oil as compared to natural gas is significantly different from the energy equivalency of 6:1, utilizing a conversion on a 6:1 basis may be misleading as an indication of value. All boe conversions in this report are derived from converting gas to oil in the ratio of six thousand cubic feet of gas to one barrel of oil.