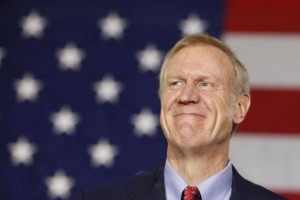 Illinois’ new governor, Bruce Rauner, will begin tackling perhaps the biggest fiscal mess in the nation, and the worst his state has seen in decades, when he is sworn in Monday.

But the Republican is offering few details on how he will proceed and how he plans to fix a political culture in the state capitol that he described as broken during the campaign.

[contextly_sidebar id=”at3P13aCDrPkuhRtZ6trpUQC5VPgIM79″]The transition team for Rauner, a private equity investor and first-time office-holder, in a report on Friday deferred specific fiscal recommendations until a later date. “An effective plan will include spending cuts, efficiencies, comprehensive tax reform, and many changes that, over time, will require difficult choices and shared sacrifice,” the report said.

The Land of Lincoln is buckling under a chronic structural budget deficit and the lowest credit ratings and worst-funded pension system among the 50 states.

Pension payments are projected to jump to nearly $7.6 billion in fiscal 2016 from $6.8 billion this fiscal year. And outgoing Democrat Governor Pat Quinn’s budget office recently estimated Illinois’ pile of unpaid bills will climb to $9.8 billion at the end of fiscal 2016, from $4 billion this year.

“In the modern era … the state has never been in this poor of financial condition,” said Laurence Msall, president of the Civic Federation, a Chicago-based government finance watchdog group.

To make progress, Rauner will need to find a way to work with a legislature dominated by longtime Democrat power broker Mike Madigan, speaker of the Illinois House. David Merriman, an Illinois budget expert at the University of Illinois, said Rauner needs to focus on what is politically achievable. “You have a Democratic legislature and a Republican governor so they’re going to have to figure out some way to work together,” he said.

Robert Amodeo, a portfolio manager at asset manager Western Asset, put Illinois in a same class with the most troubled municipal bond issuers in the nation. “We will continue to monitor developments in Puerto Rico, New Jersey and especially Illinois, all of which face challenging fiscal conditions,” Amodeo said.

To sell its debt, Illinois has had to offer hefty yields. Illinois bonds due in 10 years yield about 140 basis points more than stellar AAA-rated debt, according to Municipal Market Data. California, which is bouncing back from its fiscal morass, has a so-called credit spread of only 24 basis points.

Illinois’ credit ratings at A-minus and A3 are the lowest among the 50 states and rating agencies have warned of further downgrades. An immediate concern is the Jan. 1 partial expiration of 2011 temporary tax hikes that moved the personal income tax rate down to 3.75 percent from 5 percent, and dropped the corporate rate to 5.25 percent from 7 percent.

Quinn’s budget office projected that income tax revenue will drop by $5.16 billion to $14.64 billion in fiscal 2016, which begins July 1. The state’s projected general fund deficit is expected to balloon to nearly $5.8 billion, from just $180 million this fiscal year.

An effort to reform Illinois’ troubled state pension system, which faces a $105 billion unfunded liability, has foundered, at least for now. The state’s Supreme Court later this year will rule on a lower court’s rejection of a 2013 law making sweeping cost-saving changes to state retirement benefits.

Labor unions, which are fighting the 2013 law, have vowed a constitutional challenge to Rauner if he executes a campaign plan to move workers to 401k-type plans.

Msall at the Civic Federation said Rauner has to release his fiscal 2016 budget in February before the Supreme Court rules.

“In the short term, the answer has to be that you have a comprehensive plan that stops making the situation worse,” Msall said.