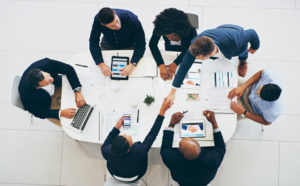 What’s going on everybody? Things in Brooklyn are starting to feel pretty normal and I must say, and I don’t hate it. Meanwhile, we’ve got more than one healthcare technology deal to discuss today.

BlackRock saw advantages to acquiring TDS through the perpetual capital fund. The flexible hold outlook gives management a much broader view of the growth path for the company. This means that rather than rushing to make improvements or growth acquisitions in the first year or two, management can choose the best opportunities even if they come after several years.

“Sometimes value creation in an industry like healthcare where there are long-term trends, that doesn’t necessarily match up with a three-year hold,” said Colm Lanigan, head of Americas for BlackRock Long Term Private Capital. Read more on BlackRock’s strategy on PE Hub.

M&A tear: Elsewhere in healthcare technology, Symplr, backed by Clearlake Group and SkyKnight Capital, has agreed to acquire HealthcareSource HR from Francisco Partners, which is now six years into its investment. The deal extends offerings at Symplr, a healthcare-focused governance, risk and compliance (GRC) company, adding talent management solutions to the Software-as-a-Service platform.

Although Clearlake early last year hired advisers to evaluate options for Symplr, including a minority stake sale or 50-50 joint transaction in which it would bring on another PE firm, the firm has instead focused on supporting its M&A playbook. Clearlake, after all, remains less than three years into its investment. For Symplr, HealthcareSource marks its 12th acquisition over the last six years, and seventh under its current backers. Read more on Symplr’s latest buy on PE Hub.

Other notable participants in healthcare GRC consolidation include RLDatix, a portfolio company of TA Associates and Five Arrows Principal Investments.

For sale: Waud Capital Partners has kicked off a sale process for CyberGrants, a software provider for the philanthropic sector, sources familiar with the matter told PE Hub.

The firm is working with Raymond James, and books with marketing information for the company were sent out last week, the sources said.

Waud Capital invested in the company in June 2015 in partnership with Mark Layden, a seasoned software executive who assumed the CEO position as part of the deal. In November 2014, WCP and Layden partnered to form Greenwood Technology Partners with a focus on acquiring and building a leading vertical market software company.

That’s it! Have a great week ahead. As always, hit me up with tips, feedback or whatever at springle@buyoutsinsider.com.