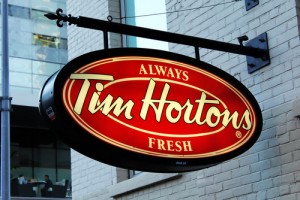 Burger King (BKW.N) is in talks to acquire Canadian coffee and doughnut chain Tim Hortons Inc (THI.TO) in a deal that would create a fast food powerhouse with a market capitalization of roughly $18 billion.

Burger King and Tim Hortons, comparable in size by market value, confirmed their merger discussions late on Sunday, saying the new company would be the world’s third-largest quick service restaurant. It would be based in Canada, which has lower overall corporate taxes than the United States, especially for entities that have large amounts of earnings from overseas.

The proposed deal would be structured as a so-called tax inversion transaction to move Burger King’s domicile out of the United States, and could come as soon as in the next few days, according to sources familiar with the discussions.

Recent attempts by companies for tax inversion deals, which are done to avoid higher U.S. taxes and save money on foreign earnings and cash held outside the United States, have drawn the attention of President Barack Obama, who criticized a “herd mentality” by companies seeking such deals.

Tax inversions have become popular in recent months as low interest rates are making it cheaper for companies to make acquisitions, KeyBanc analyst Christopher O’Cull wrote in a note to clients about the potential deal.

Tim Hortons, on a forward earnings basis, is trading at a discount to Burger King, noted O’Cull. This factor likely makes an acquisition of the only slightly less valued Canadian chain more viable.

Walgreen Co (WAG.N) recently decided against a tax inversion deal in its takeover of European pharmacy chain Alliance Boots, saying it was not in the best long-term interest of shareholders to attempt to re-domicile outside the U.S.

Amid heightened political sensitivity in the United States to such tax-cutting transactions, Walgreen said it was mindful of the public reaction to a potential inversion deal.

3G MAINTAINING MAJORITY
The companies said 3G Capital, the majority owner of Burger King, will continue to own the majority of the shares in the new combined entity on a pro forma basis, with the remainder held by existing shareholders of Tim Hortons and Burger King.

3G, a New York-based investment firm with Brazilian roots, acquired the then struggling Burger King in 2010 for about $3.3 billion. It later took the company back to market in 2012 but still owns nearly 70 percent of the firm’s shares, according to Thomson Reuters data.

Tim Hortons and Burger King are set to operate as standalone brands within this new entity while benefiting from shared corporate services, the companies said.

Burger King said its experience in building a large global footprint would allow it to help accelerate Tim Hortons’s growth in international markets.
Under the stewardship of new Chief Executive Marc Caira, Tim Hortons recently posted results that beat analyst estimates, as moves to introduce new, pricier menu items helped boost profits. The chain, which has struggled with a U.S. expansion in recent years, is fending off mounting pressure on its home turf from well-capitalized rivals such as McDonald’s Corp (MCD.N) and Starbucks Corp (SBUX.O).

If a deal gets sealed this wouldn’t be the first time the iconic Canadian restaurant chain moves into foreign hands. It was bought by Wendy’s International Inc in 1995, but later spun out in 2006 after the fast food chain came under pressure from activist investor Nelson Peltz.

While operated from Oakville, Ontario, it kept its corporate headquarters in Delaware before moving it back to Canada in 2009. Canadian Prime Minister Stephen Harper took some credit for the move, citing the Conservative government’s decision to cut the corporate tax rate.

Since coming to power in 2006, the Conservatives have cut Canada’s corporate tax rate to 15 percent. Public companies also have to pay provincial corporate taxes that then bring their combined federal and provincial tax rate to about 25 percent or higher.

Tim Hortons and Burger King said they do not plan to comment on this potential deal further unless and until a transaction is agreed, or discussions are discontinued.

Burger King, founded in 1954 and headquartered in Miami, Florida, operates over 13,000 locations in nearly 100 countries and territories across the globe. It has a market capitalization of about $9.55 billion.

Oakville, Canada-based Tim Hortons operates more than 3,500 system wide restaurants in Canada and over 850 in the United States. Its U.S. market cap stands at about $8.4 billion.