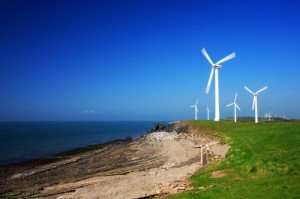 Pension fund manager Caisse de dépôt et placement du Québec has invested U.S.$500 million in a portfolio of 1,500 megawatts of wind farms across the United States and Canada, including the Le Plateau farm in the Gaspésie region of Québec.  The wind farm projects are managed by the Chicago, Illinois-based Invenergy LLC, an owner and operator of diverse power generation facilities.  Invenergy will retain majority ownership following the transaction.

Montréal, Québec, January 8, 2013 – Invenergy Wind LLC (“Invenergy”) today announced an investment of approximately US$500 million by Caisse de dépôt et placement du Québec (“the Caisse”) in a portfolio of approximately 1,500 megawatts (MW) of operating wind farms in the United States and Canada that are owned and operated by Invenergy. Following the transaction, Invenergy remains the majority controlling shareholder.

The Caisse will have a material financial interest in 11 wind projects in the United States and 2 wind projects in Canada. Included in this portfolio is the Le Plateau wind farm located in Québec. Le Plateau is a 138.6 MW wind farm located in the Gaspésie region which has been in commercial operation since early 2012. The project sells all of its renewable energy to Hydro-Québec under a long-term contract.

“Invenergy is pleased to enter into this strategic relationship with the Caisse,” said Jim Murphy, Invenergy’s Executive Vice President and Chief Financial Officer. “The Caisse is a world-class asset management firm and we find strong synergies between our operating and their investment philosophies.”

“Through this investment, the Caisse becomes a partner of Invenergy, one of the most significant wind industry players in North America,” said Macky Tall, Senior Vice-President, Infrastructure, at the Caisse. “In addition to generating stable and predictable long-term returns, the projects will enable us to broaden our presence in a forward-looking sector – renewable energy – in Québec, Canada and the United States.”

ABOUT INVENERGY
Invenergy and its affiliated companies develop, own and operate large-scale renewable and other clean energy generation facilities in North America and Europe. North America’s largest independent wind power generation company, Invenergy is committed to clean power alternatives and continued innovation in electricity generation. The company’s home office is located in Chicago and it has regional development offices throughout the United States and in Canada and Europe.

Invenergy has developed nearly 7,000 MW of clean energy projects that are in operation, in construction, or under contract, including 47 wind, 3 solar, and 6 thermal power facilities. For more information, please visit www.invenergyllc.com.