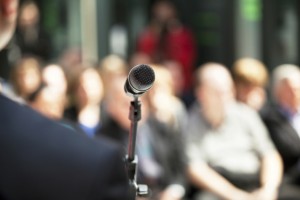 The high tech name badges that The Carlyle Group used to track the movements of its limited partners at its annual meeting in September are part of a suite of technologies being used increasingly by conference organizers and event planners.

The name badges were equipped with radio-frequency identification and near field communication technologies to automatically track the sessions that limited partners attended, according to an annual meeting invitation seen by peHUB. The technology worked only in the rooms where sessions were being held, the invitation said.

[contextly_sidebar id=”U4fQ0UKoBGRXrmkswriDlzwInbaXiSpp”]RFID tags use wireless technology to track everything from packages and pets to people. Near field communication allows mobile devices to connect through radio communications by bringing them into close proximity.

LPs were informed of the use of the technology in the email invitation and were given the option to receive a badge without the tracking technology, according to the document. It is not clear if any LPs chose to avoid using the smart badges.

“We plan to use the information we collect through this technology to help evaluate the popularity of sessions and provide you with additional information on the subject matter of the sessions you attend,” the invitation reads.

This was the first time Carlyle used the smart name badges and it is not clear if the firm will use the tracking technology again at next year’s annual meeting.

LPs who spoke to peHUB said there were mixed reactions to the technology among LPs at the annual meeting, ranging from indifference, to privacy concerns, to those who had no idea their badges were equipped with such intricate technology.

This type of data collection at events is not unusual. Several business conference providers have been using this technology to collect data on the preferences of participants, according to an article last year in a trade publication, RFID Journal.

One of those, NAPE Expo, which runs business conferences and oil and gas-focused expos, has been using this type of technology to figure out “where people are finding value at our shows,” according to Megan Ledford, marketing specialist at NAPE Expo.

The technology “helps us be more intuitive about our business processes and what we deliver,” Ledford said. For example, conference organizers can get a sense of how effective a certain panel session was depending on the amount of time attendees spent in the room.

NAPE Expo has not received any pushback on the tracking nature of the smart badges, “since we don’t publish their information or invade their privacy,” Ledford said. “As far as the expo world, this is something that everyone is kind of accepting of and aware of,” she said.

The smart badges, meanwhile, were not the only fancy tech Carlyle featured at its annual meeting. The firm also developed a mobile app for iPad and iPad Mini containing speaker bios, the agenda, due diligence sessions and presentations, according to the invitation.