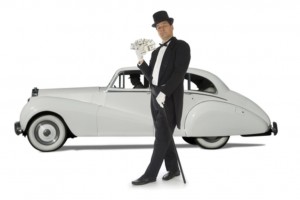 Carlyle Group LP paid its co-president who was hired last year from JPMorgan Chase & Co $31.2 million in 2014, a higher compensation than many veterans received at the private equity firm, a regulatory filing showed on Thursday.

The disclosure shows the lengths to which Carlyle went to poach Michael Cavanagh in a bid to attract top talent and diversify its business. Cavanagh’s compensation at JPMorgan in 2013 was $17 million.

The 49-year-old executive, who was once one of JPMorgan Chief Executive Officer Jamie Dimon’s closest aides, got $26.1 million in stock and $5 million in a cash bonus in 2014, the Carlyle filing shows. His annual salary was $137,500.

Cavanagh was named Carlyle’s co-president and co-chief operating officer last year alongside Glenn Youngkin, a veteran of the firm. Youngkin’s compensation last year was $20.3 million. He received another $12.2 million in dividends as a result of his ownership of some Carlyle shares.

Kewsong Lee, who Carlyle poached from rival Warburg Pincus LLC in 2013, was paid $20.3 million in 2014 for serving as deputy chief investment officer for private equity.

Carlyle’s founders each received at least $95.4 million from pay and dividends and at least another $132 million from their personal investments in the firm’s funds, the filing shows.

David Rubenstein, William Conway and Daniel D’Aniello, who founded Washington, D.C.-based Carlyle in 1987, received $98.2 million, $95.1 million and $95.1 million in dividends respectively in 2014 as a result of their roughly 18 percent stakes in the firm.

That is slightly up from the $92.6 million they each received in 2013. Carlyle’s distributable earnings increased by 16 percent year-on-year in 2014 on strong asset sales amid frothy equity and debt markets.

Rubenstein received $132.3 million, Conway $247.7 million, D’Aniello $133.8 million and Youngkin $20.5 million from Carlyle’s funds in 2014 as a result of investing alongside the firm’s clients. Carlyle does not break down how much of that was profit and how much was capital that they invested over the years.

In total, Carlyle employees invested $435 million of their own money in the firm’s deals in 2014.

With $194.5 billion in assets under management, Carlyle has diversified beyond private equity in alternative asset classes such as corporate credit, real estate and hedge funds.