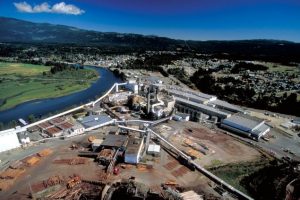 Catalyst Paper Corp (TSX: CYT) said its four largest shareholders and Kejriwal Group International (KGI) have expressed an interest in acquiring the company. The shareholders, which hold or control about 79 percent of Catalyst’s outstanding common shares, are: Mudrick Capital Management, Cyrus Capital Partners, Oaktree Capital Management and Stonehill Capital Management. The investor group indicated it may seek to acquire Catalyst’s equity at $6 per share and exchange certain debt, with an investment by KGI of $60 million. Catalyst, a Richmond, B.C.-based pulp and paper company, said it would be “pleased to review and evaluate any proposal” that emerges from the group’s expression of intent.

Richmond, (BC) – Catalyst Paper Corporation (TSX:CYT) (“Catalyst” or the “Company”) announced today that its board of directors has received a copy of an expression of intent among Kejriwal Group International (“KGI”) and the four largest shareholders of the Company holding or controlling approximately 79% of its outstanding common shares, including Mudrick Capital Management, L.P., Cyrus Capital Partners, LP, Oaktree Capital Management, LP and Stonehill Capital Management LLC (collectively, the “Principal Securityholders”).

The Principal Securityholders have completed Schedule 13D filings with the United States Securities and Exchange Commission, including a copy of the expression of interest.

The expression of intent contemplates a timeline during which KGI and the Principal Securityholders will pursue a transaction the indicative terms of which include that:

common shares would be acquired for C$6.00 per share, except those held by the Principal Securityholders which would be exchanged for interests in a new junior convertible term loan;
existing credit facilities would have their maturities extended, or be refinanced;
existing PIK toggle senior secured notes due October 2017 would be exchanged for interests in a new 5-year US$260.5 million term loan;
KGI would commit to equity investments on or after closing of (i) C$25 million in the Company and (ii) C$35 million in a newly formed guarantor of the new term loans entered into as part of the transaction; and trade and other obligations would remain unaffected.

The board of directors has indicated that it is encouraged by KGI’s proposal which could provide the Company with a significant amount of capital which further enhances and accelerates Catalyst’s planned growth initiatives. The board of directors will be pleased to review and evaluate any proposal which may result from the expression of intent among KGI and the Principal Securityholders. There can be no assurance that any definitive proposal will be made, that any agreement will be executed and on what terms, or that this or any other transaction will be approved or consummated.

The Company does not undertake any obligation to provide any updates with respect to this or any other transaction, except as required under applicable law. Interested stakeholders may access the Principal Stakeholders’ filings from time to time with the U.S. Securities and Exchange Commission by visiting EDGAR on the SEC website at www.sec.gov/edgar.shtml.

Catalyst Paper manufactures diverse printing papers such as coated freesheet, C1S, coated and uncoated groundwood, newsprint, directory, as well as market pulp. Customers include retailers, publishers and commercial printers in North America, Latin America, the Pacific Rim and Europe. With five mills across North America, Catalyst has annual production capacity of 2.3 million tonnes. Catalyst is headquartered in Richmond, British Columbia, Canada, and is ranked by Corporate Knights magazine as one of the 50 Best Corporate Citizens in Canada.