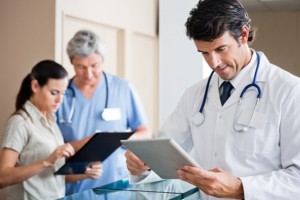 Clayton, Dubilier & Rice could more than triple the value of its investment in Envision Healthcare, which is expected to go public next week.

Envision, parent of the largest U.S. provider of ambulance services formerly known as Emergency Medical Services Corp, will price its IPO on Tuesday, Aug. 13, a source says. It will likely go public the next day. Envision is currently looking to sell 35 million shares at $20 to $23 each via joint bookrunners Goldman Sachs, Barclays, BofA Merrill Lynch and Citigroup, according to an SEC filing dated July 31.

The Greenwood Village, Colorado-based company provides physician-led outsourced medical services in the U.S.; it has more than 20,000 affiliated clinicians. Envision’s net income rose 23% to $9.6 million for the quarter ended June 30, according to SEC filings. Revenue grew 12% to $899.2 million for the same time period. Envision’s debt has increased since it was acquired by CD&R. Total long-term debt stood at $2.7 billion as of June 30. This compares to $421.3 million in debt for the year ended Dec. 31, 2010. CD&R announced its takeover of the company just months later in February 2011.

Clayton, Dubilier & Rice, a New York private equity firm, closed its buy of the company, which was then called Emergency Medical Services Corp., the following May in a deal valued at $3.2 billion. CD&R and company management invested $915 million of equity, SEC filings say. CD&R’s portion was $885 million equity, a source says.

The investment came from CD&R’s eight fund, which collected $5 billion in late 2009. The buyout shop is currently out fundraising for its ninth pool, which also has a $5 billion target, peHUB has reported.

In October 2012, Envision issued $450 million of PIK Notes and used the proceeds to pay out a special cash dividend to company stockholders. Moody’s Investors Service said at the time that the dividend came to $428 million. Envision said it plans to use $708.5 million in expected IPO proceeds to redeem the $450 million in PIK notes.

CD&R owned 97.6%, or 128.9 million shares, of Envision before the IPO, according to SEC filings. CD&R appears to have received nearly half of its investment back with the 2012 dividend.

The PE firm is not selling stock in the Envision IPO. After the offering, CD&R’s stake will fall to about 75% (assuming the greenshoe is exercised). At $21.50 a share, the mid-point of its IPO range, CD&R’s holding would be valued at roughly $2.8 billion.

Including the dividend, and paper gains, the PE firm stands to make roughly 3.6x its investment.