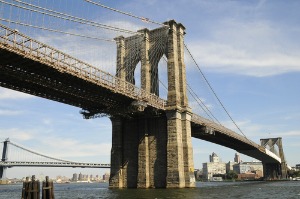 The hits just keep coming on the New York City VC scene. Today, Charlie O’Donnell, the Union Square Ventures and First Round Capital veteran who boasts a pretty long track record in a town with a still-burgeoning VC industry, revealed that he has closed $3.5 million out of a fund expected to grown to $10 million.

Two Sigma Ventures, the private VC affiliate of Two Sigma Investments, provided a major anchor commitment to the fund, called Brooklyn Bridge Ventures (it is on the other side of that bridge, in Brooklyn, unlike so many Manhattan VC shops). A blog post from O’Donnell also notes that a “significant amount also came from KEC holdings, a NJ based family office led by Jeff Citron.”

Other backers include “partners from First Round Capital and Wilson Sonsini, Wiley and Allison Cerilli, David Rose, Tom Wisniewski, Chad Stoller, and Ramesh Haridas,” O’Donnell’s blog post stated. The fund will be geared toward seed-stage investments.

“I think as other firms have gotten larger, there are less places to go for seed investors who will not only lead a round, but be active,” O’Donnell told peHUB. “That’s where I have a big opportunity–because there are a lot of people you can get checks from, not a lot of people who are rolling up their sleeves at this stage. When funds get bigger, they have more difficulty scaling.”

September has been a busy month for the New York City VC scene, after the earlier months of the year proved to be big for West Coast VCs such as New Enterprise Associates and Canaan Partners. Thrive Capital closed a $150 million fund and Flybridge Capital Partners became the latest VC to expand its New York footprint. Last week, news broke that Founder Collective raised a bigger Fund II.