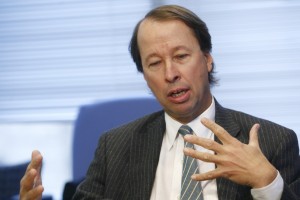 (Reuters) – Credit Suisse Group AG (CSGN.VX) has agreed to sell a private equity business to Blackstone Group (BX.N), the latest move by an investment bank to sell a business with illiquid assets in order to appease regulators and bolster its balance sheet.

The Volcker rule — named after former Federal Reserve Chairman Paul Volcker and part of the Dodd-Frank financial reform law — is expected to limit bank investments in private equity funds and was cited by Switzerland’s Credit Suisse last summer as a reason for exploring a sale.

Blackstone said on Monday it would buy Credit Suisse’s secondary private equity business which buys and sells stakes in private equity funds and has $9 billion in assets under management. The deal price was not disclosed.

Central to the deal was Blackstone President Tony James. Before he was hired by Chief Executive Stephen Schwarzman in 2002 as his right-hand man, James was chairman of global investment banking and private equity at Credit Suisse and was instrumental in 2000 in starting the business Blackstone has now agreed to take over, called Strategic Partners.

“Many of us here at Blackstone were once colleagues of the Strategic Partners team, and this gives us high confidence that it will be a seamless cultural fit here at the firm,” James said in a statement.

Headed by Stephen Can and Verdun Perry, Strategic Partners has raised over $11 billion of capital commitments, completed over 700 transactions, and acquired over 1,400 underlying limited partnership interests since its launch in 2000.

With $218 billion of capital under management, Blackstone is the world’s largest alternative asset manager, active in real estate, private equity, corporate credit and hedge funds. Like its peers, it has been seeking to expand its investment platform to manage more investor money.

The deal is expected to close by the end of the third quarter of 2013 and follows moves by other investment banks to wind down their private equity investment activities.

Bank of America Corp (BAC.N) for example had $1 billion in private equity investments at the end of the fourth quarter, down from $5.7 billion at the beginning of 2010.