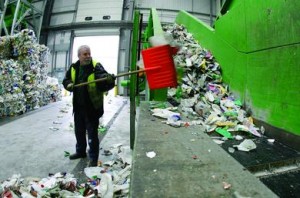 First round bids are now in for the auction of Essent Milieu, the Dutch waste management and disposal group, with a shortlist expected this week. A mix of trade, private equity and infrastructure funds are understood to have bid for the group, though a mooted bid from CVC and KKR did not emerge because of competition issues with their existing AVR portfolio company.

Sale adviser ING has been putting together staple financing for the bid and this was drawing to a close at the end of last week. Despite the difficulties of arranging a staple at the same time as a sale, the facility is on target to close fully subscribed, with around four banks already committed and a similar number still looking. During the process ING did not ask for exclusivity from banks and some lenders have set up separate funding trees with specific sponsors.

The staple is split between drawn tranches totalling €372.5m and a €20m revolver, with indicative pricing of 400bp, 450bp and 500bp for respective A, B and C tranches. Despite some concern that this pricing could be on the low side, it found support among lenders, with only one requesting a modest increase. A €150m mezzanine tranche has been tougher to fill. That said, three major funds are thought to be interested and they could easily cover the required amount. However, in view of the difficulties in the mezzanine market they are unable to commit until they have more clarity around the buyside sponsor.

In a market that has been largely moribund this year, with activity limited to just a handful of small regionally placed transactions, it is a very positive development for the European marketplace that €400m in senior LBO debt can be placed. Essent Milieu’s stable credit profile is a key factor, as is a conservative debt structure that sees an initial leverage of around 3.5 (rising to 4.5 once provisions for making good landfill sites are taken into consideration).

Moreover, bankers said that even if Essent Milieu goes to a trade buyer, the exercise shows that – while the European market remains exceptionally tough – reasonable sums can be raised. In addition, the syndication and bidding process has helped to show which banks are still open for business.

Other assets that are attracting potential private equity bids in Europe include ThyssenKrupp Industrieservice, a unit of German steelmaker ThyssenKrupp, which is up for sale. A reports suggest that CVC Capital Partners, KKR and Bain Capital could be among the bidders.

Germany is not a region noted for its fondness for the private equity model – at least that seen during the credit boom – so it is striking that ThyssenKrupp Industrieservice is not the only sizeable German company that is attracting private equity interest.

Phoenix Pharmahandel, which is part of the Merckle Group that is currently being broken up, has been linked to Boots, the chemist chain owned by KKR. The addition of Phoenix, which is a drugs wholesaler, would be a tactically good move for Boots, it is said.