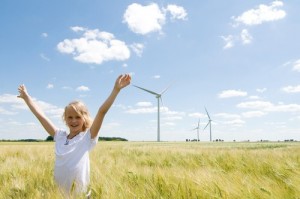 Finavera Wind Energy Inc., a Vancouver-based company focused on developing wind farms in North America and Ireland, has agreed to sell its Tumbler Ridge and Meikle wind energy projects to power company Pattern Energy Group LP for up to $28 million. The deal remains subject to shareholder approval. Pattern Energy, which has offices in offices in San Francisco, San Diego, Houston, New York, and Toronto, has been a portfolio company of U.S. private equity firm Riverstone Holdings since 2009.

VANCOUVER, April 29, 2013 /CNW/ – Finavera Wind Energy Inc. (‘Finavera Wind Energy’, ‘Finavera’ or the ‘Company’) (TSX-V: FVR) is pleased to announce the completion of a Purchase and Sale Agreement with Pattern Renewable Holdings Canada ULC, a subsidiary of Pattern Energy Group LP (‘Pattern’) following discussions with BC Hydro and various government agencies. Pattern Energy is a large, independent power company operating 1,155MW of wind energy projects in Canada, the United States and Chile. Pattern and Finavera have prioritized the purchase by Pattern of the Company’s Tumbler Ridge and Meikle Wind Energy Projects for gross cash consideration of up to $28 million subject to certain conditions. Pattern will retain an option for two years from closing of this transaction to purchase the Wildmare and Bullmoose Wind Energy Projects on similar terms. The Transaction is subject to Shareholder Approval and third party consents.

Finavera CEO Jason Bak states, “This transaction provides a strong return on capital invested in these projects and provides a platform for the next stage of growth for Finavera Wind Energy. Finavera has established itself as an early stage developer of renewable energy projects up to the point where large scale capital is required for construction. The incoming cash will be used to pay down debt, aggressively manage our burn rate, and embark on a fiscally prudent review of opportunities in the marketplace within the next 2 to 6 months. Given the depressed state of a significant number of junior companies with excellent assets, it is an ideal time to be in a strong positive cash position.”

Under the terms of the agreement with Pattern, up to $9.3 million will be paid to Finavera upon shareholder approval of the transaction and the completion of Pattern’s acquisition of the project companies. The balance of the $28 million will be payable on a milestone basis as the projects proceed to construction financing. Pattern has also agreed to provide a credit facility to the Company at a rate of 10% per annum, which will be repaid in 2013. The agreement is subject to approval from shareholders and the TSX Venture Exchange. The Company will be mailing an Information Circular to shareholders shortly and a shareholder meeting will be scheduled before the end of June to seek approval for the transaction.

In addition to the consideration due to the Company for this transaction with Pattern, Finavera is continuing to develop the 105 megawatt Cloosh Valley Wind Project in Co. Galway, Ireland with SSE plc (SSE:LSE). Cloosh Valley is currently Ireland’s largest onshore wind project and the project is expected to attain financing and commence pre-construction activities in Q4 2013. At this point, a final payment of €7.14 million (approx. $9.53 million) is due to the Company, as per the terms of the agreement signed with SSE in August 2010. In addition, Finavera maintains a 10% working interest in the Cloosh Valley Wind Project.

“Based on the Pattern transaction and the value of the Cloosh Valley Wind Project assets, and using a set of conservative working assumptions, Finavera estimates the Company’s net asset value to be $0.41 per share. In this market, having cash on hand puts Finavera in a strong position to identify and develop new opportunities for the benefit of shareholders or to return cash to shareholders in the event that opportunities do not arise.” concluded Bak.

On behalf of the Board,

About Finavera Wind Energy Inc. (www.finavera.com)
Finavera Wind Energy is a company focused on developing wind farms in North America and Ireland. Our mission is to create and operate a diversified portfolio of wind projects while protecting and enhancing the physical and social environment. In British Columbia, Canada, four projects totaling 300 MW have been awarded 25 year AAA-rated Electricity Purchase Agreements and one has received full environmental approval and permitting for construction. In Ireland, the Company has signed a partnership agreement with SSE plc for development of the 105MW Cloosh Valley Wind Project, which is expected to begin construction in 2013. Finavera is continuing to opportunistically review prospects for growth and the enhancement of shareholder value.

Statements in this news release, other than purely historical information, including statements relating to the Company’s future plans and objectives or expected results, constitute Forward-looking statements. The words “would”, “will”, “expected” and “estimated” or other similar words and phrases are intended to identify forward-looking information. Forward-looking information is subject to known and unknown risks, uncertainties and other factors that may cause the Company’s actual results, level of activity, performance or achievements to be materially different than those expressed or implied by such forward-looking information. Such factors include, but are not limited to: uncertainties related to the ability to raise sufficient capital, changes in economic conditions or financial markets, litigation, legislative or other judicial, regulatory and political competitive developments and technological or operational difficulties. Consequently, actual results may vary materially from those described in the forward-looking statements.