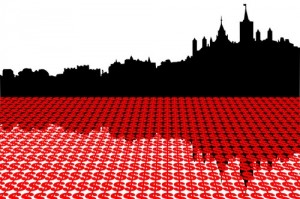 Canadian labour funds Fonds de solidarité des travailleurs du Québec FTQ and Fondaction CSN expressed disappointment on behalf of 735,000 investors about the federal Minister of Finance’s continuing plans to eliminate the tax credit for labour-sponsored venture capital corporations by 2017. They asked Ottawa to reconsider, noting a proposed “closer partnership in which they would make a significant contribution to the success” of the Venture Capital Action Plan. It was reported that the government this summer received nearly 40 briefs by business associations and others attesting to the “valuable contribution” of the labour funds.

Montréal, September 13, 2013 – The Fonds de solidarité FTQ, Fondaction CSN and its some 735,000 shareholders are disappointed with the federal Minister of Finance’s proposal to eliminate the federal tax credit for labour-sponsored funds, made public today.

Since the March 21st budget, tens of thousands of Québec taxpayers have asked Ottawa to reconsider this measure that will ultimately translate into higher taxes for those who have succeeded in cultivating a habit of saving by contributing to a labour fund.

The business community across Québec was united in its demand that the federal government keep this tax credit, which helps Québec companies secure sizeable key investments, particularly in venture capital. During the consultation period held this summer, nearly 40 briefs attesting to the valuable contribution of Québec’s labour funds were submitted by business associations and companies across the province.

Canada’s Venture Capital and Private Equity Association, which represents the industry’s players, also asked that this credit be maintained and stated in a press release on March 27 that:

“… a critical piece of infrastructure may be stripped from the entrepreneurial and venture capital eco-system. This seems contrary to the Federal Government’s Venture Capital Action Plan which encourages capital amplification and enhanced “doors” for access to capital.”

Québec’s labour-sponsored funds are once again asking Ottawa to reconsider its plan, which jeopardizes the still fledgling venture capital industry at a time when the Canadian economy desperately needs investments to fuel innovation, create quality jobs and boost exports. Since 2004, Québec’s labour funds have committed close to $6 billion in unsecured venture capital to Québec firms. During discussions with the federal Minister of Finance in the last few weeks, they proposed a closer partnership in which they would make a significant contribution to the success of Ottawa’s new Venture Capital Action Plan.

The two funds will actively participate in the upcoming consultation on the proposed legislative measures, where it will continue to put forward its proposals.

Created in 1983, the Fonds de solidarité FTQ has been driving the Québec economy for 30 years. With net assets of $9.3 billion as at May 31, 2013, the Fonds is a development capital fund that channels the savings of Quebecers into investments in all sectors of the economy to help create and maintain jobs and further Québec’s development. The Fonds is a partner, either directly or through its network members, in 2,395 companies. With 615,664 shareholders-savers, the Fonds helps create, maintain or protect 170,915 jobs. For more information, visit www.FondsFTQ.com.

Fondaction invests in Québec SMEs in order to help maintain and create jobs in Québec, within a context of sustainable development. It manages $1.03 billion in assets derived from retirement savings collected from more than 120,000 shareholders. It is the financial partner of some one hundred companies and of partner and specialized funds operating in all industry sectors and in the social economy. www.fondaction.com.