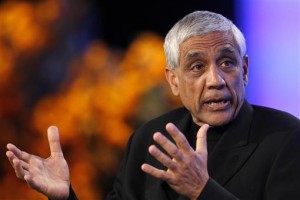 For a firm with a substantial portion of its portfolio in clean technology, Khosla Ventures seems to be doing pretty well. The firm’s Fund III had a portfolio worth 1.3 times invested capital as of the end of March, according to the California Public Employees Retirement System (CalPERS). A seed fund raised in 2009, meanwhile, had a multiple of 1.1.

Overall, the numbers look better than one might expect, given that the firm is famous in Silicon Valley for its embrace of alternative fuels and other cleantech sectors which have performed badly in the last couple years. Though that’s not the firm’s only area of focus (it’s also quite active in the mobile, Internet and consumer health spaces, among others), cleantech has historically accounted for close to half of investment dollars, according to Thomson Reuters data.

So far this year, the vast majority of rounds backed by Khosla Ventures have been outside the energy industry. However, that does not mean the firm is moving away from sustainability-minded investments, founder Vinod Khosla says.

Rather, with fewer co-investors remaining in the space, the firm expects to back fewer individual companies and to allocate more capital to each one. The plan is to also continue making early stage investments with technical risk.

“When you invest early in cleantech, so many people are afraid to take a risk that you get extremely attractive valuations,” says Khosla, who notes that the firm was a seed or very early-stage investor in many of its portfolio companies in biofuels and other cleantech sectors, which enabled it to take a significant stake at a low valuation. Though valuations may be down from their pre- or post-IPO peaks, they’re still much higher than they were at seed stage.

Even today’s innovative companies in the energy sector are still attracting large commitments from co-investors. On Monday, Lightsail Energy, a developer of energy storage technology incubated by Khosla Ventures, announced that it raised $37 million in Series D funding led by Peter Thiel. Khosla, Bill Gates, Innovacorp and several other investors also participated in the round.

So far,  tKhosla Ventures has had at least twenty portfolio companies sell to acquirers or go public (VCJ subscribers can go here for a complete list of exits).

From its cleantech portfolio, five biofuel companies sold or had IPOs. Of those that are public, just one, Pasadena, Calif.-based renewable fuels developer KiOR, has a market value greater than the amount of venture capital it raised. Amyris Biotechnologies, which develops an industrial synthetic biology platform, and Gevo, a biofuels developer, were both trading recently at less than one-tenth their post-IPO peaks. Cellulosic ethanol company Mascoma, meanwhile, first filed to go public in March, but has not since submitted an amended prospectus.