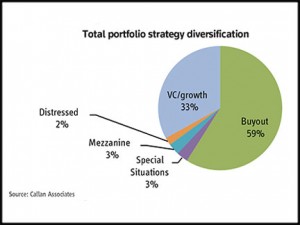 Investment strategy: A mix of funds of funds and direct fund investments; backs both established and emerging managers

After 18 years as a private equity investor, the pension fund’s portfolio, which was valued at $302.7 million as of December 31, includes 48 commitments to just 10 managers, many of which have close ties to Chicago and the Midwest.

The $10.2 billion pension has structured the portfolio to address two distinct mandates. The larger of the two is a developed manager program that invests in funds, co-investments, secondary interests and funds of funds managed by established firms with global strategies, according to a Callan Associates report released to Buyouts through a Freedom of Information Act request.

The pension fund has committed a little more than $630 million across four firms through the program, with roughly two-thirds of those commitments going to advisory shops Adams Street Partners and Mesirow Financial Private Equity, both of which are headquartered in Chicago. The program also includes $116 million in commitments to HarbourVest Partners and $103.1 million to Pantheon Ventures. The developed manager program, which includes vintages spanning from 1996 to 2013, generated a 1.53x TVPI multiple as of December 31, according to the report.

The second mandate, which has tallied $105 million in Chicago Teachers’ commitments since 2003, is earmarked for emerging firms that back minority and women-owned fund managers and businesses, as well as emerging managers based in Illinois and the Midwest. The emerging manager program includes two commitments totaling $35 million across a pair of funds of funds managed by Chicago-based boutique Muller & Monroe, one of which is dedicated to women, minority and Midwestern-owned and operated managers.

The remainder of the emerging manager portfolio is allocated across managers with direct investment strategies. The pension fund has committed $55 million across six direct funds managed by ICV Partners, Hispania Capital Partners and Pharos Capital Group.

The only managers Chicago Teachers’ has not re-upped to are SynCom Venture Partners and Palladium Equity Partners. The Callan Associates report describes SynCom’s fifth fund, a 2006 vintage, as being bottom quartile, having generated a negative 17.6 percent internal rate of return as of December 31. (Buyouts was unable to reach SynCom for comment.) Callan Associates reports Palladium’s third flagship fund as being top quartile. That fund had generated a 15 percent return as of the same date.

The emerging manager program had generated a 1.14 TVPI multiple as of December 31, according to the Callan Associates report.

Although Chicago Teachers’ has limited its private equity portfolio to just 10 managers, Callan Associates in its report characterizes the pension fund’s holdings as being “a well-developed, mature portfolio that is highly diversified.”

Buyout funds account for 59 percent of the portfolio’s net asset value, with venture capital and growth funds making up another 33 percent (see accompanying charts). The remaining 8 percent is divided between special situations, mezzanine and distressed funds.

International portfolio companies comprise 28 percent of its portfolio, with companies based in the Midwest—to which the pension fund has a clear investment mandate—accounting for 14 percent. Consumer and retail sector investments comprise 21 percent of Chicago Teachers’ private-equity portfolio, the largest share of any single sector.

All told, the Chicago Teachers’ private equity portfolio has performed well, considering its reliance on funds of funds and emerging strategies. The portfolio had generated a 1.48x TVPI multiple as of December 31, according to Callan Associates.