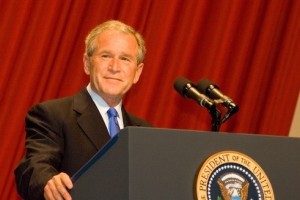 The Bush Family may not be enjoying the best relationship with private equity these days since presidential contender Jeb Bush put together a notably PE-unfriendly tax plan.

“He spoke about his four hours a day painting,” one of our spies said. Another source said: “He’s a more engaging speaker than I thought … not much substance … It was pure entertainment.”

It’s not clear how much the former president commands for his keynote presence, though several media reports pegged it between $100,000 and $175,000. Sources tell us George W. also was the featured speaker at this year’s annual meetings for Blackstone Group and Vista Equity Partners. No one from Blackstone or Vista returned requests for comment.

Carlyle’s AGM attracts more than 1,000 people, with an LP-to-staff ratio of about 3 to 1, a source said. The event is planned and managed by Carlyle’s conference staff, which is led by Nancy Palleschi, managing director and head of global conferences. The team is made up of about four to five people, but grows with temporary workers around AGM time, sources tell us.

LPs come from around the world to attend. This has changed the turnout of the event over time, according to one of our spies.

“In the old days, you’d walk around and recognize everybody. Now, they have such a huge platform and such a diverse set of LPs, it’s just a lot of new faces,” the source said.

Carlyle’s event is a good illustration of how the asset class is changing and growing — going global, with different sets of LPs like sovereign wealth funds and pensions from emerging economies. It must be an interesting few days for networking and information gathering.