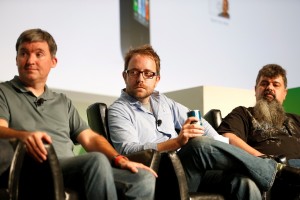 Google Ventures has a new general partner in MG Siegler, a renowned former technology writer for TechCrunch who has spent the last 19 months working as a venture capitalist.

It was in the fall of 2011 that Siegler, along with TechCrunch founder Michael Arrington and Patrick Gallagher, a classmate of Arrington at Claremont McKenna College, launched CrunchFund, a seed and early stage fund that raised $20 million for its inaugural effort.

In a blog post announcing his move to Google Ventures, Siegler thanked Arrington and Gallagher, writing: “I cannot thank Michael and Patrick enough for the opportunity to start CrunchFund alongside them. When I look over the portfolio of truly excellent startups and entrepreneurs we’ve brought together (some of which aren’t listed as they’re not public yet), I’m — and you’ll forgive me for using a word that has been all-but-stripped of its meaning by its use on social networks these days — humbled.”

CrunchFund does not operate a website, but at Siegler’s personal site, he lists 94 startups in which Crunchfund owns a stake, including some of the hottest tech startups on the planet, such as Pinterest, Uber, Square, and Airbnb. Of the 94 companies featured, 10 have been acquired, including the video clip company Vine, which sold to Twitter for an undisclosed amount last October; the enterprise social network Yammer, acquired by Microsoft last July for $1.2 billion (after raising $142 million from dozens of investors); and SocialCam, a mobile video application that raised an undisclosed amount of seed funding and sold to Autodesk last July for a reported $60 million.

In Siegler’s blog post, he writes that he has “been talking with the Google Ventures team for a few months now. After getting to know the partners and hearing the vision for the fund laid out by managing partner Bill Maris, it became clear that this would ultimately be a perfect fit.”

What the move means for CrunchFund is less clear. Assuming the fund has made at least 100 investments, it seems likely the firm’s first fund is very low on dry powder. (If one assumes the firm averaged $200,000 per investment, including for follow-on financings, the fund would be fully invested.)

Arrington, who sold TechCrunch to AOL in 2010 for an undisclosed price that was rumored to be in the range of $30 million, did not respond to a request for more information regarding Siegler’s departure or what the move means for CrunchFund.