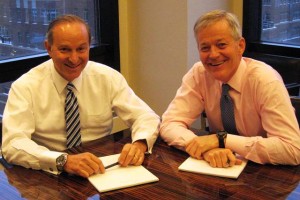 It survived, thanks in no small part to a 1.7x return generated by a $150 million investment in catastrophe underwriter PartnerRe. Crestview guided Fund I to a respectable 1.6x return multiple. Its second fund, a $2.4 billion 2009 vintage, was bigger (and a stronger performer), and now the firm is back raising a third.

Led by Goldman Sachs alums Barry Volpert and Tom Murphy, Crestview raised more than $2.6 billion for Crestview Partners III through November, nearly doubling the $1.45 billion it circled for its 2005 debut and outpacing Fund II’s total, which closed on $2.4 billion at the height of the financial crisis in 2009.

For its third flagship fund, Crestview set a $3 billion target with a $3.5 billion hard-cap. It will likely hold a final close in January with the backing of major pensions in Pennsylvania and North Carolina.

The firm’s recent track record affirms its decision to raise a larger fund. Crestview rode a wave of exits to $837 million of realizations in the third quarter alone, according to South Carolina Retirement System Investment Commission documents released in November. Recent realizations include exits of portfolio companies held through Crestview Partners I, which generated above-average performance for its vintage with an 8 percent net IRR and 1.6x multiple through September 30, according to a market source.

The firm’s performance improved with Fund II, which the same source said netted a 17 percent IRR and 1.5x as of the same date.

South Carolina committed $75 million to Fund III, and its investment materials note that the firm has generated “solid returns for its investors” by acquiring companies with lower leverage at below-market entry multiples. The firm appears to be offering some LP-friendly terms as well: The general partner is said to be planning a $220 million commitment to Fund III.

Crestview’s track record, though formidable, includes its share of hiccups. Fortunately, the firm’s versatility across a variety of sectors overcame challenges posed by its crisis-era vintage fund’s investments in a pair of under-performing financial services companies. Top performing investments in media companies drove returns through the recession and economic recovery.

Financial services companies represent the second largest component of Crestview’s overall strategy, accounting for roughly $994 million of its invested capital as of June 30, according to South Carolina documents. Those investments also generated its weakest returns, earning a little more than $1.25 of value for every dollar invested.

While investments in companies such as PartnerRe and Lancashire Holdings doubled in value, others – such as active equity manager Martin Currie and investment bank FBR & Co – failed to generate meaningful returns. Timing certainly played a role in the performance of both of those companies. Crestview acquired its stake in FBR & Co in 2006 and Martin Currie a year later. The financial crisis hit both companies hard.

Shares in FBR plummeted only a short time after its IPO in 2007, dropping from more than $72 per share in 2007 to less than $14 in late 2008. On June 30, 2013, five months prior to exiting the company, Crestview valued its stake in FBR at 0.6x gross, according to an AON Hewitt report included in South Carolina’s documents. The exit marked the only true loss within its portfolio.

Martin Currie, which the firm expects to exit at cost in 2015, went into turnaround, and a new CIO was brought in after equity markets collapsed during the recession. While those companies appear to be outliers, their under-performance dampened overall returns for the firm’s financial services platform.

Crestview has allocated roughly $1.2 billion of capital to the sector. Those investments have more than doubled in value over time, according to South Carolina documents, thanks in large part to the value of stakes in cable companies like Charter Communications and Insight Communications.

The social media boom caused many traditional cable and Internet providers to be undervalued. That led to lower acquisition prices, which drove exit multiples. Crestview’s investment in Charter yielded a 5.8x gross return upon exit, one market source said. Its stake in Insight Communications grossed a 43.2 percent IRR, according to AON Hewitt.

Crestview expects to invest 90 percent of Fund III in energy, financial services, healthcare and media, though it is unclear which of the four it will focus on, according to the AON Hewitt report.

A recent decline in oil prices may present an opportunity for the firm, which has already used Fund III to invest $200 million in Endurance Lift Solutions, a midstream energy services company.

Crestview’s ability to move across different sectors should benefit the firm as the market moves toward what many expect to be a negative cycle over the next several years.

“Crestview has the flexibility to focus on different niches in each of these four sectors in order to identify the most attractive investment opportunities and particular market dislocations,” the AON Hewitt report states. “Although the firm cannot predict the next dislocation, Crestview is confident that the pendulum will continue to swing too far from time to time.”