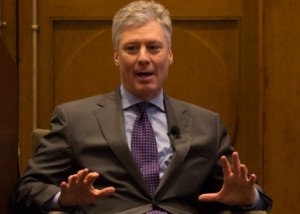 Thomas H. Lee Partners raised more than $2 billion toward a $3 billion target for its seventh flagship fund through mid-December, sources said.  The Boston-based firm plans to hold a final close for Thomas H. Lee Equity Fund VII in the spring.

A successful close would cap almost two years of fundraising for Thomas H. Lee, giving the firm its first pool of investment capital since wrapping Fund VI on $8.1 billion in late 2007.

The performance of Fund VI and its predecessor, a $6.1 billion 2000 vintage vehicle, likely complicated the firm’s most recent fundraising pitch to limited partners, market sources told Buyouts. Neither vehicle generated a top-quartile return, and Fund VI netted a single-digit return as of June 30, according to the California Public Employees’ Retirement System.

But even as Fund V and VI fell short of expectations, Thomas H. Lee’s recent track record is stronger. The firm grossed a 26.2 percent internal rate of return on deals completed in 2010 or later, according to a Hamilton Lane report obtained through a public records request to the Teachers’ Retirement System of Louisiana. That return exceeds the gross IRR generated by Fund V’s portfolio of realized investments (20.8 percent) and almost doubles Fund VI’s realized return (13.2 percent gross).

Thomas H. Lee’s recent track record likely helped attract commitments from blue chip investors like the Abu Dhabi Investment Authority and Government of Singapore Investment Corporation, both of which are anchor investors in Fund VII, Fortune reported in 2014. In December, Louisiana Teachers’ committed up to $100 million to the vehicle.

Performance should continue to improve as the firm realizes more of its Fund V and Fund VI investments. Thomas H. Lee reportedly doubled its investment when Party City went public earlier this year. The firm generated similar returns with its stake in Brazilian steakhouse Fogo de Chao, which also went public. In December, the firm agreed to sell its majority position in 1-800 Contacts to AEA Investors for an undisclosed amount less than two years after acquiring the company.

“They found religion,” said one LP who passed on Fund VII. “They’re doing things slightly cautiously, and being more thoughtful. But I think it’s because they have to.”

Few private equity firms changed as much as Thomas H. Lee Partners over the last 15 years.

Thomas H. Lee, the man the firm is named after, left in 2006 to found middle-market specialist Lee Equity Partners. Around the same time, like many firms, Thomas H. Lee Partners raised larger funds to accommodate larger deal sizes, including the $24 billion acquisition of Clear Channel Communications with Bain Capital in 2008.

“This all started to play out when Thomas H. Lee left,” said an LP who backed Fund VII. “The next generation came into play, and they needed to sort it out and align the deck chairs. Fifteen years ago, when you talked about the big boys out in the market, they were right there.”

As performance slackened through the Global Financial Crisis, the firm took steps to build up its internal controls and processes, according to the Hamilton Lane memo. In 2008, it reorganized its investment team into three distinct sector groups: business/financial services, consumer/healthcare, and media/information services, the memo said.

Thomas H. Lee’s roster of investment professionals also doubled in size, which contributed to an improvement in its overall performance, sources said.

Those moves coincided with a greater focus on mid-market companies. After 2010, the firm’s average enterprise value at entry was $1.2 billion, less than half of what it averaged on deals across Funds V and VI, according to the Hamilton Lane memo. The move down-market improved the firm’s pricing discipline. Its average entry purchase price multiple for recent deals is 7.9x, well below the 10x it averaged on deals for Funds V and VI, said one market source.

While Thomas H. Lee “has focused on lowering entry purchase price multiples … the general partner will still pay up for investments it believes have strong growth profiles,” Hamilton Lane wrote in its report. The memo also noted that the firm “refined its strategy to include a more prudent use of leverage.”

“They’ve always been smart guys,” said the LP who backed Fund VII. “It appears they’ve found their niche and their focus.”