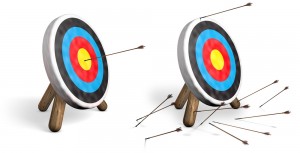 Here at the Hub, we’re all about accountability, and this year we can both beat our chest and hang our heads. Now, without further ado, here’s what we nailed and… where we were the nail, so to speak.

Hit: peHUB was the first news outlet in 2012 to report that New Enterprise Associates was launching a fundraising for the vehicle that—at $2.5 billion—is the largest fund raised so far this year.

Miss: I panned The Carlyle Group’s IPO earlier this year. Well, today’s special on the menu is crow at peHUB. Carlyle did the unthinkable, and outperformed Facebook to date. The firm’s ability to buck the trend–the shares of many LBO firms have languished in recent years–bodes well for the future of private equity IPOs.

Hit: Earlier this year, we broke down where Trulia was lagging Zillow. So, it probably shouldn’t have been a jaw-dropping surprise (at least to our wise readers) when its IPO performed poorly compared to Zillow’s, which has been a win for VCs. We were also there for you on day one of Facebook’s IPO, delineating the challenges the social network would need to overcome following its offering.

Miss: We didn’t have any specific sources on the Yelp lock-up earlier this year. (VCs may talk about some things, but stuff that could lead to insider trading charges wasn’t one of ‘em.) But I thought we’d highlight the potential for shares to fall after VCs’ lock-up ended. Shares rose.

Hit: Joined by my colleagues like Mark Boslet, Luisa Beltran, Connie Loizos, Alastair Goldfisher, Gregory Roth, Bernard Vaughan, David Toll, Joanna Glasner and Steve Bills, peHUB broke the news on billions of dollars worth of fundraisings in 2012 (as well as plenty of live deal scoops). This gang worked their tails off.

Miss: peHUB (I, specifically) was the first news outlet to report Gideon Yu would join VC firm Formation 8 as a founder. We were the only one, in fact. This is because we were not correct. (He’s a special advisor there, instead.) Good luck in the playoffs this year, Gideon, anyway.

Hit: As of this moment, the Seattle Seahawks are a playoff team. You probably thought we’d stick to the scoop-y stuff and the columns, but peHUB is quite proud that for two straight years we correctly picked sleeper teams in the NFL. Not as easy as it looks, kids.

Jury’s Out: This fall, we spent quite a bit of time talking about the potential of a Best Buy-out. Just one problem, it hasn’t happened yet, and the potential of fiscal cliff pandemonium to undo financing for what would be one of the year’s biggest deals could push Dick Schulze’s quest to re-claim his former company into 2013. Or, you know, never. Some of our calls we will have to chase into 2013…