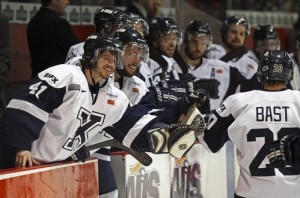 U.S. private equity firm Kohlberg & Co. has established a secondary offering for shares of Bauer Performance Sports Ltd., a Canadian developer and manufacturer of hockey and lacrosse equipment and apparel. Gross proceeds will total up to C$40 million. Upon completion of the offering, Kohlberg’s ownership interest in Bauer will be reduced to 32.3 percent. Kohlberg and Roustan Capital acquired Bauer in a corporate carve-out deal in 2008.  In 2011, Bauer raised C$75 million in an initial public offering.

Bauer Performance Sports Ltd. (“Bauer” or the “Company”) (TSX:BAU) today announced that funds advised or managed by Kohlberg Management VI, LLC (the “Kohlberg Funds”), Bauer’s largest shareholder, have entered into an agreement with a syndicate of underwriters led by RBC Capital Markets and Paradigm Capital Inc. for a secondary offering, on a bought deal basis, of 3,000,000 common shares of the Company at an offering price of Cdn$11.60 per common share. In addition, the syndicate has been granted an over-allotment option by the Kohlberg Funds, exercisable for a period of 30 days from closing, to purchase up to an additional 450,000 common shares. Bauer will not receive any proceeds from the secondary offering.

This press release shall not constitute an offer to sell or a solicitation of an offer to buy, which may be made only by means of the prospectus, nor shall there be any sale of the common shares in any state, province or other jurisdiction in which such offer, solicitation or sale would be unlawful prior to registration or qualification under the securities laws of any state, province or jurisdiction. The common shares to be sold pursuant to the secondary offering have not been and will not be registered under the U.S. Securities Act of 1933, as amended, and may not be offered or sold in the United States absent registration or an applicable exemption from the registrations requirements of such Act. This press release shall not constitute and offer to sell or the solicitation of an offer to buy the securities in any jurisdiction.

Bauer Performance Sports Ltd. (TSX:BAU) is a leading developer and manufacturer of ice hockey, roller hockey, and lacrosse equipment as well as related apparel. The company has the most recognized and strongest brand in the ice hockey equipment industry, and holds the top market share position in both ice and roller hockey. Its products are marketed under the Bauer Hockey, Mission Roller Hockey and Maverik Lacrosse, Cascade and Inaria brand names and are distributed by sales representatives and independent distributors throughout the world. Bauer Performance Sports is focused on building its leadership position and growing market share in all product categories through continued innovation at every level. For more information, visit www.bauerperformancesports.com.