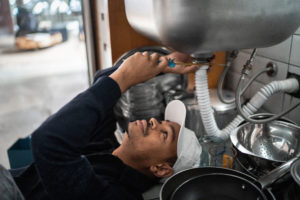 After yesterday’s Mega-deal Monday, things are a bit quiet on the private equity front this Tuesday morning.

Here’s one PE deal that caught my eye.

Len the Plumber. Consumer-focused PE firm L Catterton is buying LTP Home Services Group, a residential plumbing and HVAC services provider, from Thompson Street Capital Partners. TSCP will retain a board seat and minority stake in the company. LTP provides service under a number of brands, including Len the Plumber.

While plumbing may sound low-tech and perhaps mundane, the deal intrigues me for two reasons: first, it demonstrates that technology matters in everything today; and second, it shows the power of the mid-market PE model.

On the tech angle: “The residential services category is highly fragmented and at an inflection point where technology and digitalization are expected to drive significant consolidation,” said Matt Lischick, a partner at L Catterton. “Positioned in desirable, high-density markets with world-class technicians, a reputation for excellence, and a proven acquisition track record, LTP is a truly unique platform with a disruptive combination of growth opportunities. We look forward to working with LTP’s exceptional management team as they continue to rapidly scale their business.”

On the PE model: “LTP is a case study in what can be achieved with a buy-and-build acquisition strategy,” said Jeff Aiello, a managing director at TSCP. “When we partnered with Jeff Cooper and his management team, it was clear that LTP had the executive talent to grow organically and continue to execute on their proven geographic greenfield expansion playbook. By completing six add-ons and driving substantial organic growth, the business has quadrupled during TSCP’s ownership. We are excited to continue our partnership with LTP as minority owners and look forward to seeing the next phase of growth with L Catterton’s involvement.”

In the new ranking, HEC Paris Professor Oliver Gottschalg, the study’s main author, addresses the lack of attention given to companies and investors targeting mid-market firms which, according to the U.S. Department of Commerce, are businesses with pre-tax earnings between $5 million and $250 million. The ranking lists PE firms that cumulatively raised between $1 billion and $3 billion over a decade in terms of aggregate performance based on all their buyout funds raised between 2008 and 2017. Gottschalg analyzed performance data from 517 PE firms and the 991 funds they raised between 2008 and 2017 with an aggregate equity volume of $1.5 trillion.

“Mid-market buyouts are a particularly interesting area of private equity, but investors typically have (even) less visibility into who the best performing fund managers are than in the larger buyout space,” he said. “This new ranking addresses this problem and puts a spotlight on those players who generated the strongest returns over a decade of fund vintages.”

Women’s History Month. In the Wire throughout March, we’re highlighting the dealmakers PE Hub and Buyouts named Women in private equity: The class of 2022.

Today, we’re focusing on Emily Pollack, partner, Cornell Capital, profiled by Kirk.
Pollack recently transitioned to private equity but very quickly made her mark, writes Kirk. Prior to entering PE, Pollack worked on M&A at Davis Polk & Wardwell, insurer AIG and cable company Harron Communications. With this experience, which included advising PE firms on M&A transactions, becoming an investment professional felt like a natural next step, Pollack told Kirk: “I’m a deal junkie at heart. I really enjoy the value creation in partnership with management.” She joined Cornell Capital as a managing director in 2017.

Leading the firm’s financial services strategy, within a year she negotiated the acquisition of Talcott Resolution, a life insurance and annuity business, from The Hartford for $1.7 billion. Three years later, and ahead of schedule, Talcott was sold to Sixth Street. She also led the 2019 buyout of Spectrum Automotive, an agent, marketer and administrator of auto warranties, from Southfield Capital. Along with helping to drive Spectrum’s growth, which included eight add-on acquisitions, in 21 months, she engineered its sale to HPS Investment Partners. These two realizations helped earn Pollack a promotion to partner in 2020.

For more, read the whole report, in which we profile 10 stellar dealmakers.

And see the companion piece, Women in PE: Covid’s unintended consequences at home and in the office.

That’s all for now. Chris writes the Wire on Wednesdays, so I’ll “see” you on Thursday.

All the best,
MK