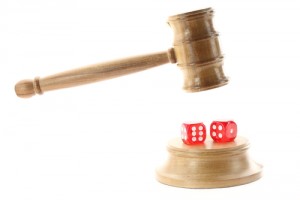 The New York state attorney general on Tuesday ordered the fantasy sports sites DraftKings and FanDuel to stop accepting bets in New York, saying that the operations were essentially illegal gambling, according to copies of letters to the companies seen by Reuters.

DraftKings and FanDuel have been at the center of a firestorm of controversy since early October when a DraftKings employee won $350,000 from a $25 entry in an American football contest on the rival FanDuel site. The two companies then banned their employees from playing, but local and federal authorities began to investigate whether the fantasy sites offered games of chance, which were essentially gambling.

The letters on Tuesday from the office of New York Attorney General Eric Schneiderman said that the fantasy sites were considered gambling because customers “are clearly placing bets on events outside of their control or influence, specifically on the real-game performance of professional athletes.”

In the games, fans pay to compete for daily cash prizes in simulated athletic contests.

In the letters, the attorney general’s office said it demanded that the companies “cease and desist from illegally accepting wagers in New York state.” The letters were sent to both DraftKings and FanDuel and given to Reuters by a spokesman for Schneiderman.

The state of Nevada took a similar action in mid-October, with the Nevada Gaming Control Board saying the companies had to cease operations in the state.

A spokesperson for DraftKings said the company was disappointed at New York’s “hasty action.”

“We strongly disagree with the reasoning in his opinion and will examine and vigorously pursue all legal options available to ensure our over half a million customers in New York state can continue to play,” the spokesperson said.

DraftKings estimated that 56 million people in the United States played fantasy sports.
FanDuel also disagreed with the decision, saying in a statement: “This is a politician telling hundreds of thousands of New Yorkers they are not allowed to play a game they love.”

“The game has been played – legally – in New York for years and years, but after the attorney general realized he could now get himself some press coverage, he decided a game that has been around for a long, long time is suddenly now not legal,” FanDuel added.

According to media reports, the U.S. Department of Justice and the Federal Bureau of Investigation are investigating the industry.

The Federal Trade Commission, which investigates companies accused of unfair and deceptive acts, has noted that it has authority over the companies, Senator Bob Menendez and Frank Pallone, both New Jersey Democrats, said on Tuesday.

The attorney general’s order in the midst of an investigation against two targets of that investigation is a “somewhat unprecedented development,” said Jeff Ifrah, a lawyer in Washington whose clients include online gaming and daily fantasy sports sites.

Photo of a gavel and dice courtesy of Shutterstock.