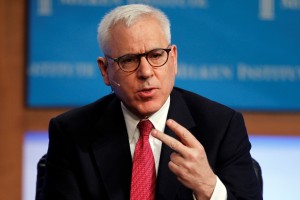 The Carlyle Group may have turned in a lackluster IPO, but David Rubenstein’s private equity firm was the busiest buyer in the third quarter.

Washington D.C.-based Carlyle was the most active of all PE firms during the time period and its deals totaled the most in terms of deal value, according to separate data from Thomson Reuters and Dealogic. Carlyle led or took part in 18 U.S. announced mergers during the third quarter, valued at $16.3 billion, Dealogic says. BC Partners, which had three deals totaling $10 billion, took second place.

Carlyle went public in May, raising $671 million. The PE firm barely stayed above its $22 IPO price but the stock has since gained. On Monday, Carlyle’s shares added 12 cents to close at $26.24.

Carlyle was part of a group that bid $634.7 million for 7 Days Group Holdings, a Chinese economy hotel chain. The group included co-chairmen Boquan He and Nanyan Zheng, as well as Sequoia Capital China.

Warburg Pincus is the largest shareholder of 7 Days and holds a 16 percent stake.

Carlyle was part of another group that bid $3.66 billion to buy Focus Media Holding, a Chinese advertising company.

Carlyle wasn’t part of a group when it offered in August to buy Getty Images, a leading supplier of stock photos, video and other digital content. (Mark Getty, the company’s co-founder and chairman, and the Getty family rolled most of their ownership interests into the deal).

The deal was valued at $3.3 billion. The seller is Hellman & Friedman, which acquired Getty in a $2.4 billion deal.

Hellman & Friedman invested up to $941.3 million equity in Getty as part of 2008 buyout, according to SEC filings.

Carlyle partnered up with BC Partners to buy Hamilton Sundstrand Industrial from United Technologies Corp. The deal was valued at $3.46 billion. Hamilton Sundstrand makes highly engineered, mission-critical pumps and compressors for the global industrial, infrastructure and energy markets.

The $4.9 billion offer was Carlyle’s biggest transaction in third quarter.