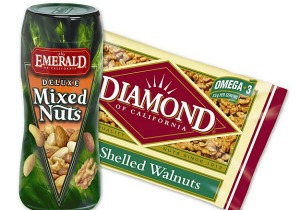 May 23 (Reuters) – Oaktree Capital Management said it would invest $225 million in the ailing Diamond Foods Inc to help the company shore up its balance sheet, meet funding needs and support growth in its business.

The investment firm will provide some relief for the seller of Emerald nuts and Pop Secret popcorn, which was grappling with high debt after revelations of improper accounting led to the removal of the company’s top two executives, earnings restatements and the collapse of a planned acquisition.

Diamond said on Wednesday that Oaktree’s investment will allow it to amend its credit agreement with existing lenders and meet its anticipated near-term and long-term funding needs.

The investment consists of $225 million of newly issued debt and warrants to buy 4.4 million shares of Diamond stock. The debt will mature in 2020 and will bear annual interest of 12 percent. The warrants will be exercisable at $10 per share and would constitute ownership of about 16.4 percent of the company.

If Diamond secures a specified minimum supply of walnuts from the 2012 crop and meets profitability targets for the nut business for the six months ending on Jan. 31, 2013, all the warrants will be canceled and Oaktree may exchange $75 million of the debt for convertible preferred shares.

The shares would have an initial conversion price of $20.75, a 3.5 percent discount to the closing price on April 25, the date the commitment was made.

Earlier this year, Diamond said it had to restate earnings for fiscal years 2010 and 2011 after a probe by its audit committee found that it improperly accounted for payments to walnut growers. Chief Executive Michael Mendes and Chief Financial Officer Steve Neil were replaced.

The scandal also led to the collapse of Diamond’s plan to acquire Pringles potato chips from Procter & Gamble, a deal that would have made Diamond the world’s second-biggest snack-food maker behind PepsiCo Inc’s Frito-Lay.

The company was also being investigated by the U.S. Securities and Exchange Commission, and media reports said U.S. prosecutors had launched a criminal inquiry.

Also on Wednesday, Diamond said it introduced a new standard walnut purchase agreement to use with growers going forward.

The agreement provides for Diamond to buy a grower’s walnut crop for an initial term of one, two or three years, with the contract automatically renewing for one-year terms unless a termination notice is delivered on or before June 1 in the year following a harvest.

It also calls for Diamond to pay growers in four installments from autumn through spring and lays out the percentages of the total purchase price required in each payment.