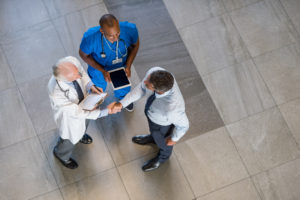 New York private equity group One Equity Partners is approaching a deal for the contract sales arm of Quintiles IMS, according to people familiar with the matter.

The anticipated deal would conclude a Goldman Sachs-run sales process that encompassed a limited group of financial and strategic participants, the people said.

The Quintiles contract-sales business was expected to command a multiple of EBITDA of around 7x to 8x, sources said. One source said the unit is projecting between $60 million and $65 million in adjusted 2017 EBITDA, while another source said the figure lies north of $65 million. The unit generates less than $800 million in revenue, they said.

The unit, reported by Quintiles as Integrated Engagement Solutions, encompasses more than 5,600 sales reps and more than 580 clinical educators across 20 therapeutic markets, its website says.

Reuters initially reported in late June that Quintiles had hired Goldman to run a sales process for the division.

One Equity, which spun out from JP Morgan Chase in 2015, has the contract sales business under exclusivity, the people said.

Other parties that looked at the division included at least one strategic, U.K.-listed UDG Healthcare plc, as well as Raleigh, N.C., PE group NovaQuest Capital Management, sources said. The fusion of UDG’s contract-sales outsourcing arm with the Quintiles division would have created significant synergies. But such a deal would have likely required more time to gain antitrust clearance and a potential shareholder vote, sources previously said.

For Danbury, Connecticut-based Quintiles, the anticipated divestiture would enable the contract research organization to concentrate on growing its higher-margin commercial and R&D businesses.

Middle-market-focused One Equity is investing out of its sixth fund, which racked up $1.65 billion in February. One Equity Partners VI LP was the first fund raised with outside capital following the JP Morgan spinout.

Representatives of One Equity, Quintiles and UDG declined to comment. Spokespeople for Goldman and NovaQuest did not return requests for comment.