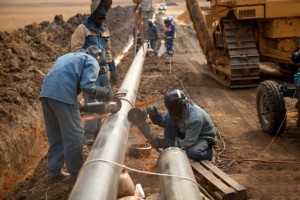 Banks are responding to tumbling crude prices by trimming the value of oil reserves tied to credit lines, possibly causing a cash crunch for some highly-leveraged U.S. exploration and production firms.

With U.S. crude production still rising and the oil cartel OPEC showing no willingness to cut output to curb global oversupply, there is little to suggest that prices will rebound soon from a 40 percent slide since June.

Lower reserve valuations would reduce the amount of credit available. When banks next reassess loans, which they typically do twice a year in October and April, smaller publicly traded oil companies with heavy debt and largely used up credit lines could see some financing dry up.

“They may be able to refinance debt. But I don’t think anybody is going to be able to add on significantly more debt,” said Christian Ledoux, a senior portfolio manager at San Antonio-based South Texas Money Management.

Tapping other sources of financing such as new equity issues and asset sales has become harder for smaller companies given their shares’ underperformance against bigger peers.

For example, Goodrich Petroleum shares are down 75 percent, compared with an 13 percent slide in shares of larger Devon Energy Corp.

That could leave smaller firms at the mercy of costlier financing from hedge funds and private equity investors.

Banks typically value reserves at around 80 percent of the quote for benchmark West Texas Intermediate crude on the NYMEX futures market, and most credit lines now appear out of whack.

According to Macquarie Tristone’s quarterly survey of 39 energy lenders, the average price banks are using to value oil reserves is about $77 a barrel. That is 120 percent of the NYMEX price of around $64 per barrel.

“Assuming the banks want the same level of cushion they had six months ago, you could see a scenario where banks start cutting their price deck closer to $60,” said Eli Kantor, oil analyst with Canaccord Genuity.

So-called price decks are the prices for crude oil and natural gas that banks, analysts and investors use to value energy companies’ reserves. Some banks change prices quarterly or less frequently, while others adjust them monthly.

Kantor said dozens of smaller firms worth $3 billion or less are more vulnerable than large oil and gas companies with healthier balance sheets and less dependent on bank credit.

Leverage is one factor that could determine whether a company will face a loan reset, analysts and bankers said.

A ratio of debt to EBITDA (earnings before interest, taxes, depreciation and amortization) of 4 or more indicates a company has too much debt. Several smaller oil and gas firms fall into that category, including Goodrich Petroleum Corp, Quicksilver Resources Inc, Energy XXI Ltd and Halcon Resources Corp.

Goodrich said this week it had enough liquidity under present market conditions to fund its 2015 capital plan while Energy XXI chief executive John Schiller said that the company was cutting debt and costs.

“We need to bring some money in the door and preserve liquidity,” he told the Capital One energy conference.

Halcon managed to negotiate an increase in its borrowing base in October when oil prices were 34 percent higher. Quicksilver has hired a restructuring consultant to address its liquidity issues, according to a filing with the U.S. Securities and Exchange Commission.

None of the companies responded to requests for comment.

Banks have only made minor loan adjustments in October when oil was still trading around $85 per barrel, but after a further slide more substantial cuts are due by April and some lenders are already re-negotiating loan terms.

“Our price deck is tied to the market and we set our price deck every month,” he said, noting the banks of oil and gas clients were well hedged through the first half of 2015 and clients had not tapped 46 percent of available credit.

BOK’s Ellinor said there could be some fallout for oil and gas firms in the second half of next year when their cash flow is no longer protected by hedges.

Companies which have a bank line, and substantial amounts of mezzanine and bond debt were most at risk, he said.

Some hedge funds are waiting in the wings to offer costlier alternative financing to companies, while private equity firms also see an opportunity.

(Reporting by Anna Driver in Houston and Swetha Gopinath in Bangalore; Editing by Terry Wade and Tomasz Janowski)