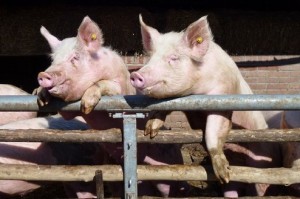 The Canadian assets of Big Sky Farms Inc., a Humboldt, Saskatchewan-based hog production company, have been acquired by Olymel LP, which focuses on the slaughter, processing and distribution of pork and poultry. The St-Hyacinthe, Québec-based Olymel and Ernst & Young Inc. entered into a purchase and sale agreement valued at C$65.2 million, subject to certain adjustments, in October 2012, following Big Sky Farms’ being placed in receivership.  Big Sky Farms has in recent years been backed by several Canadian private equity firms.

HUMBOLDT, SK, Jan. 21, 2013 /CNW Telbec/ – Olymel’s executive today announced the acquisition of the Canadian assets of Big Sky Farms Inc., and its related entities (collectively, ”Big Sky Farms”) the second largest hog producer in Canada. The Humboldt, Saskatchewan company had been placed in receivership last September when it was unable to meet its obligations after significant losses, due mainly to the soaring price of grain used for animal feed and depressed hog prices. Olymel and Ernst & Young Inc., the court-appointed receiver of Big Sky Farms, entered into a purchase and sale agreement dated October 16, 2012, at a purchase price (subject to certain adjustments) of $65.25 million. This purchase agreement was subsequently approved, subject only to a receiver mandated sale process, on October 19, 2012 by the Saskatchewan Court of Queen’s Bench. This transaction, which was concluded on January 20, 2013, makes Olymel subsidiary OlySky, owner of the Canadian assets of Big Sky Farms. Since yesterday, OlySky has taken over all the Canadian operations which will continue under the name of Big Sky Farms. On December 17, the Competition Bureau announced that it would not oppose the acquisition, as its examination determined that it will not prevent or substantially reduce competition in the markets. This acquisition is Olymel’s strategic response to the challenge of hog supplies in western Canada.

“The Olymel executive welcomes Big Sky Farms employees into the Olymel family, and wishes to assure them that it will make every effort to put the company back on a profitable footing,” noted Olymel l.p. President and CEO Réjean Nadeau.

The acquisition of Big Sky Farms makes Olymel the owner of the company’s Canadian assets, including all its facilities located in Canada, primarily in Saskatchewan, the breeding herd and boar studs, the genetic nucleus, maternities and finishing sites, as well as feed mills and transport activities. Founded in 1995, Big Sky Farms employs more than 400 people. With a herd of 42,000 sows, it has annual production of one million hogs.

“This acquisition is in line with the policy of strengthening the capacity of our processing and value-added product manufacturing plants, for both the domestic market and export outlets. Although this is its first foray into the swine production industry, Olymel plans to draw on the expertise of its owners who are already involved in the production sector to take advantage of all possible synergies in order to integrate Big Sky Farms into its operations. Olymel also intends to maintain production quality and the excellence of its manpower, as well as implement best practices in the areas of environmental protection and animal welfare, among other things. We are proud to strengthen our presence in western Canada, help maintain the vitality of the hog production industry and contribute to the economic development of the agri-food sector, particularly in Saskatchewan,” Mr. Nadeau went on to say.

For many years Big Sky Farms has been a leading supplier to the Olymel hog slaughterhouse and butchering plant in Red Deer, Alberta, a plant that employs more than 1,300 persons and has a weekly slaughtering capacity of 90,000 hogs. Olymel also stated that in addition to supplying hogs to its Red Deer plant, Big Sky Farms will maintain its business relations with the company’s customers and suppliers.

“Despite a few difficult years, Big Sky Farms remains a gem, and has extensive expertise in its field. The arrival of Olymel, one of the largest food processing company in Canada, with its in-depth knowledge of the pork industry, offers many prospects for outlets on both domestic and international markets. This acquisition also represents an important source of stability for hog production in western Canada. Members of the Big Sky Farms management and its continuing employees can now look to the future with optimism,” noted the new Vice-president, Production, Olymel and former Big Sky Farms Chief Executive Officer Casey Smit.

Olymel l.p. is a Canadian leader in the slaughtering, processing and distribution of pork and poultry, with facilities in Quebec, Ontario, Alberta, Saskatchewan and New Brunswick. The company employs more than 10,000 persons and exports nearly half its production, mainly to the United States, Japan and Australia, as well as some sixty other countries. Its sales were over $2.3 billion last year, with a slaughtering and processing capacity of 160,000 hogs and 1.7 million birds a week. The company markets its products mainly under the Olymel, Lafleur and Flamingo brands.