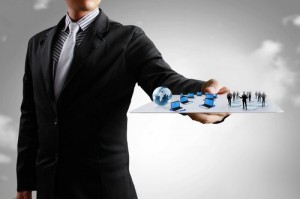 During the quarter, the Company booked $2.8 billion in new contract wins, extensions and renewals, bringing the last twelve months total bookings to $6.6 billion, or 106% of revenue. At the end of December 2012, the Company’s backlog of signed orders stood at $18.3 billion, up $4.7 billion compared with the same period last year.

“I am very pleased with our overall performance and with the progress we made with respect to executing our Logica integration plan, which is designed to create incremental and long-term value for all stakeholders,” said Michael E. Roach, President and Chief Executive Officer. “Our clients continue to respond in a positive manner to the expanded scale and scope of our offerings and operations following our merger.”

During the quarter, net debt was reduced by $140.6 million for a net debt of $2.96 billion, representing a net debt to capitalization of 44.7% at the end of December 2012. At the end of Q1-2013, the Company had approximately $1.1 billion in available cash and unused credit facilities.

About CGI
Founded in 1976, CGI Group Inc. is the fifth largest independent information technology and business process services firm in the world. With approximately 71,000 members located in offices and global delivery centers in the Americas, Europe and Asia Pacific, CGI offers a comprehensive portfolio of services including high-end business and IT consulting, systems integration, application development and maintenance, infrastructure management as well as a wide range of proprietary solutions. Further to the recent acquisition of Logica, CGI’s annualized revenue is in excess of C$10 billion, with an estimated order backlog of approximately C$18.3 billion; its shares are listed on the TSX (GIB.A) and the NYSE (GIB) and are included in the FTSE4Good Index. Website: www.cgi.com.

Non-GAAP financial metrics used in this release: Constant currency growth, adjusted EBIT, net debt to capitalization, DSO and ROIC
CGI reports its financial results in accordance with IFRS. However, management believes that these non-GAAP measures provide useful information to investors regarding the Company’s financial condition and results of operations as they provide additional measures of its performance. Additional details for these non-GAAP measures can be found on page 2 of our MD&A which is posted on CGI’s website, and filed with SEDAR and EDGAR.