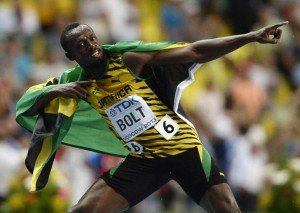 Two smartphones in the news today, BlackBerry and the iPhone, and for different reasons. The iPhone 6 is coming Sept. 10 and I have no doubt plenty of people will buy one. VatorNews reports that BlackBerry puts itself up for sale, and I wonder if it can find a buyer.

Forbes has a breakdown on how the spectrum of investors (angels, VCs and PE folk) stand to benefit from crowdfunding.

One of the more compelling deals of the day, in my opinion, is that of MyFitnessPal raising $18 million in its first ever institutional round from Kleiner Perkins Caufield & Byers and Accel Partners. Here’s what Mashable has to say about it. If the health and fitness app developer—which boasts 40 million members—is profitable, then what does that do and say for RunKeeper, Fitbit and the rest of the growing quantified self sector?

From Harry McCracken, a story about how Green Apple Books in San Francisco is dealing with the e-book revolution.

Yowza! Usain Bolt is the fastest man we’ve ever seen, winning the 100-meter dash this weekend in Moscow at 9.77 seconds. And you have to love the fortuitous timing of the photo at his finish, when a lightning bolt strikes in the background.

Just like everyone had something to say, good and bad, about the real life Steve Jobs, Ashton Kutcher’s portrayal of the Apple icon in the movie “Jobs” has similarly spawned much smack talk, including this list of alternative actors to choose from. A must read is what @aplusk himself says on Quora about his taking on the role in the question “How did Ashton Kutcher prepare for his role as Steve Jobs in the new movie Jobs?”

The final season of “Breaking Bad” began on AMC last night. I could do an entire Second Opinion on last night’s episode and the series itself, but I’ll just share this link: 10 facts about the show you might not have known.

After so many years here at Thomson Reuters, this is my first Second Opinion. Tell me how I did. Drop me a line at alastair.goldfisher@thomsonreuters.com. And before any of you ask me about my name, and, yes, there is a short story behind it, you need to read this. “The 15 Most Annoying Parts Of Having A Unique Name.” All 15 ring true.

Photo: Usain Bolt of Jamaica celebrates winning in the men’s 100 metres final during the IAAF World Athletics Championships at the Luzhniki stadium in Moscow on Aug. 11, 2013. REUTERS/Dylan Martinez.