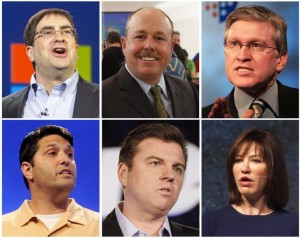 Feeling lucky? Online betting service Landbrokes is letting people bet on who will be named the next CEO of Microsoft. Nokia CEO Stephen Elop is the favorite with 5-1 odds. You can really clean up if Facebook COO Sheryl Sandberg gets the nod. The long shot is paying 40-1.

Rising mortgage rates are taking some steam out of the housing recovery. Contracts to buy previously owned U.S. homes fell for the second straight month in July.

Will the Fed hold off on tapering QE3? Some think that’s a real possibility given that Wall Street is so anxious about a U.S. attack on Syria and the pending debate over the debt ceiling.

Russia has no sense of humor and apparently has never heard of the Internet. The government seized four paintings — including one of President Vladimir Putin in women’s underwear — and shut down the museum displaying the works. No word on how it plans to cleanse the interweb of the growing number of photos of the Putin painting. Here’s a good shot.

Twitter has purchased Trendrr, which runs a social TV analytics service. No word on the sale price.

The Fort Hood shooter has been sentenced to death.

Zuck may be out of luck. Facebook is getting some push back on its executive compensation plans.

JPMorgan Chase is talking to regulators about settling probes of its “London Whale” losses for $600 million.

In news that has zero impact on your life but you’re dying to know anyway, Michael Douglas and Catherine Zeta-Jones have separated.

The White House has said Obama buddy Lawrence Summers isn’t a slam dunk to replace Ben Bernanke as Fed chairman, but it hasn’t even started to vet Fed Vice Chair Janet Yellen, who appears to be the only other candidate under consideration.