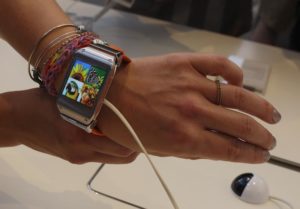 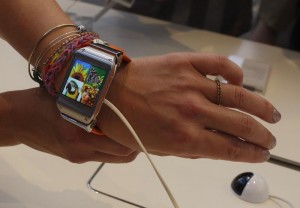 Samsung today unveiled a smartwatch that acts as an accessory for its Galaxy smartphone. Would you pay $299 to be the first one on your block to own one? Or is it still too clunky to be considered cool? (Click here for a slideshow with lots of pics.)

Dude. Do you want a Toq? In an apparent bid to woo the stoner set, Qualcomm will start selling its Toq smartwatch in the fourth quarter.

A U.S. Senate panel approved a resolution to strike Syria over alleged use of chemical weapons.

President Obama once again said the U.S. isn’t spying on citizens. “I can give assurances to the public in Europe and around the world that we are not going around snooping at people’s emails or listening to their phone calls,” he said in a news conference today.

But Brazil may be another matter. Following a report that the U.S. spied on her private communications, Brazilian President Dilma Rousseff wants a public apology, according to an exclusive report from Reuters.

Keep your shoes on. The TSA is expanding a program that will allow more passengers to keep their shoes on during airport screenings. Wonder if this will hurt flip-flop sales.

The Federal Reserve’s John Williams says he is in favor of the Fed slowing bond purchases later this year.

The Beige Book shows the U.S. economy grew at a modest to moderate pace in July and August.

First they threw a fit over the casting of Ben Affleck as the next Batman. Now Twitter users are whining about the casting of Charlie Hunnam and Dakota Johnson as the leads for “Fifty Shades of Grey.” The Daily Beast likes Hunnam for the role of Christian Grey and has compiled a bunch of NSFW video clips of his steamiest on-screen sex scenes. You be the judge.

In news that just plain gross and has zero impact on your life but you want to know anyway, Richard III had intestinal worms. Gross, right? But you’re still gonna click on the link, aren’t you?

Photo: A Samsung host shows a Samsung Galaxy Gear smartwatch at a pop-up shop following a launch event in New York’s Times Square, September 4, 2013. The watch is an accessory for its Galaxy smartphones, with a small screen offering basic functions like photos, hands-free calls and instant messaging. Photo by Brendan McDermid, Reuters