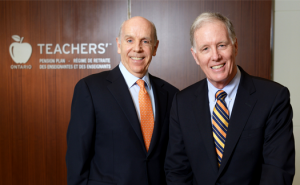 Ontario Teachers’ Pension Plan‘s Ron Mock, who is currently senior vice-president, fixed income and alternative investments, will succeed Jim Leech as president and CEO at the beginning of 2014. Mr. Leech, who joined Teachers in 2001 to lead the pension plan’s private equity investment arm Teachers’ Private Capital, will retire on December 31, 2013. Mr. Mock joined Teachers in 2001. His responsibilities have included being a board member of Cadillac Fairview, which manages Teachers’ $21 billion real estate portfolio.

Mr. Leech is retiring December 31, 2013 after more than 12 years at Teachers’, the last six as Chief Executive Officer. Teachers’ Chair, Eileen Mercier, made the announcement today, noting that Mr. Mock’s appointment continues the organization’s tradition of cultivating talent internally and promoting from within.

“Ron brings the ideal combination of experience, knowledge and leadership acumen to the CEO role at this high performance organization,” said Ms. Mercier. “We have every confidence that he will lead the organization to new levels of success as CEO, as Jim has and Claude Lamoureux did before him.”

A selection committee of the board has been engaged in preparations for the CEO succession since 2011, in anticipation of Mr. Leech’s retirement. “We undertook the same approach we would expect of our portfolio companies: a comprehensive succession process with consideration to both external and internal candidates to ensure the best possible successor to Jim, for the best possible impact on the organization,” said Ms. Mercier. “Jim and his executive team have a number of important goals they are focused on achieving before he retires later this year, and he remains firmly in charge until then,” she added.

Ron Mock joined Teachers’ in 2001 as Director of Alternative Investments. He was promoted to Vice-President later that year, a position he held until 2008, when he was promoted to Senior Vice-President, assuming responsibility for all fixed income assets and strategy as well as alternative investments and hedge funds. He also is a board member of wholly-owned Cadillac Fairview, which manages Teachers’ $21 billion commercial and retail real estate portfolio.

Mr. Mock holds a B.A.Sc. in Electrical Engineering from the University of Toronto and an MBA from York University.

“I have the luxury of inheriting the leadership of a thriving and successful organization,” said Mr. Mock. “I will be working from a solid foundation and I can only thank the board for their confidence and Jim for his generosity in sharing his knowledge, and most of all for his vision and leadership during his term as Teachers’ CEO. I will be working closely with him until his retirement to ensure a smooth transition.

While this appointment may be somewhat daunting, the prospect of leading this exceptional organization is the most invigorating challenge I have ever faced and I look forward to doing my best for everyone from members to employees, plan sponsors to investment partners.”

“I could not be more pleased with the board’s decision to appoint Ron,” said Mr. Leech. “He has been an outstanding leader at Teachers’ and members of the board, our executive team and I admire his knowledge and good judgment. Ron and I share the privilege of joining Teachers’ at the same time. His track record here is excellent, with the Fixed Income portfolio totaling $60.0 billion at the end of 2012. Importantly,” stressed Mr. Leech, “Ron has a reputation for collaboration and team building, balancing current needs with a view to future possibilities. Plan members, sponsors, our employees and our investment partners all will benefit from his leadership of Teachers’.

“Over the past six years, I have had the honour and privilege of leading this one-of-a-kind organization,” Mr. Leech noted. “We have always been focused on doing the right things for our members, and that is reflected in our culture, which I know will continue under Ron’s leadership.”

Mr. Mock’s successor as Senior Vice-President has not yet been named.

Mr. Leech joined Teachers’ in 2001 with a mandate to expand Teachers’ private investment activities globally. Under his leadership, Teachers’ Private Capital became one of the world’s largest and most successful private investors. He took on the CEO role just as the investment world was about to start reeling from the financial crisis. He is credited with keeping a steady hand on the wheel as Teachers’ coped with the tumult, and with leading the team that has recouped all losses and raised net assets to $130 billion. He has earned international recognition for his leadership in advocating for an evolved defined benefit plan model that reflects the demographic and economic reality of the day. His full professional bio is available here.

With $129.5 billion in net assets as of December 31, 2012, the Ontario Teachers’ Pension Plan is the largest single-profession pension plan in Canada. An independent organization, it invests the pension fund’s assets and administers the pensions of 303,000 active and retired teachers in Ontario. For more information, including our 2012 and previous annual reports, visit www.otpp.com. Follow us on Twitter @OtppInfo.