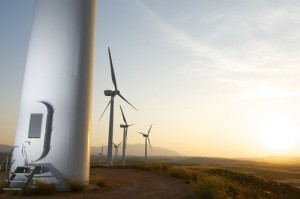 Samsung Renewable Energy Inc and Pattern Energy Group LP have completed the financing for the 150 megawatt Grand Renewable Wind Project in Haldimand County, Ontario. Utilizing wind turbine blades and towers, the project will produce clean energy equal to the needs of approximately 50,000 Ontario homes each year. Construction is scheduled to be completed in the fall of 2014. Pattern Energy, which was formed in 2009, is backed by U.S. private equity firm Riverstone Holdings.

Over 1,000 Ontario workers will be involved in project construction and manufacturing

More than 1,000 workers from across Ontario will be involved in every aspect of the GRW project – from manufacture and assembly of the wind turbine components to site construction, installation work and project operations. Hundreds of workers will be on site during construction, including local subcontractors that will be utilized for various aspects of the project’s construction. The GRW project will begin construction soon and is scheduled to be completed in the fall of 2014.

“Samsung is proud to be working with the community and our Six Nations partners on the construction of this project,” said Mr. K.J. Kim, Executive Vice President, Samsung C&T. “The Grand Renewable Wind project, along with our other projects in the Province, is creating thousands of high-skilled jobs that will benefit real people in this community and across Ontario.”

“Pattern is very pleased to be starting the construction of our second project in Ontario, both of which will use towers and blades manufactured, respectively, in Tillsonburg and Windsor,” said Mike Garland, CEO of Pattern Development. “It is an honor to have the Six Nations as a partner in this groundbreaking project and we would like to thank the community of Haldimand for their support. The Grand Renewable Wind project is bringing many benefits to Ontario, including new jobs, tax revenue, economic stimulus, and clean power. This is one of four wind projects we are building in Ontario as part of our commitment to help the Province develop strong new sources of clean energy for a brighter future.”

The Grand Renewable Wind project will support the local economy with more than $4 million in direct spending each year of project operations. This includes significant funding for community initiatives with a contribution of approximately $10 million over a period of 20 years to a Community Vibrancy Fund.

GRW will utilize 67 Siemens 2.3MW wind turbines, which will be made in Ontario. The blades will be manufactured at Siemens’ turbine blade facility in Tillsonburg and CS Wind’s facility in Windsor is using Ontario-made steel to manufacture the turbine towers.

“Siemens is proud to be a partner in the Grand Renewable Wind project as it represents a significant contribution of the Green Energy Act to establishing and maintaining a green collar manufacturing and service economy in the Province of Ontario,” said Jacob Andersen, vice-president, Wind Power, Siemens Canada Limited.

The Grand Renewable Wind project will allow Ontario to reach its clean energy goals and continue to move away from its dependence on dirty coal production. Compared to coal-fired generation, each year the GRW project will offset approximately 423,000 tonnes of CO2, the equivalent of taking nearly 83,000 cars off the roads, and conserve enough water to meet the needs of approximately 12,000 Ontarians. The wind power generated at GRW will be sold to the Ontario Power Authority under a power purchase agreement.

About Samsung Renewable Energy, Inc.
Samsung Renewable Energy is creating clean, renewable energy for generations to come. Together with our partners, Samsung is making a $5-billion investment in Ontario to create the world’s largest cluster of wind and solar power. Our investments will create 900 direct renewable energy manufacturing jobs and 9,000 high-skilled jobs in Ontario. Built on Samsung C&T’s commercial and technical expertise and the success of its renewable energy projects in several countries – including the United States and Europe – Samsung is creating real jobs, through real investment, benefitting real people. For more information, please visit www.samsungrenewableenergy.ca.