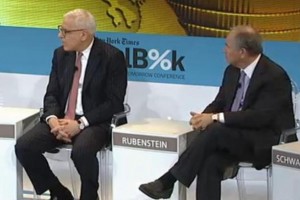 The chiefs of the world’s two biggest private equity firms described their asset class as one of the last, best hopes available to score the kinds of returns investors need to catch up following the broken hopes of the financial crisis, when pension funds and individual investors generally fell short of their investment goals.

Referring to pensions and other institutional investors, Steve Schwarzman, the head of The Blackstone Group, said: “The people who run these institutions… they’re close to [being] out of tricks. And we’re sort of the last stop on the railway.” He was speaking, along with David Rubenstein, the co-head of The Carlyle Group, and Ray Dalio, the head of Bridgewater Associates, a hedge fund manager, at the New York Times’ DealBook conference in New York.

Over the last few years, most pensions have been getting deeper into the hole of unfunded obligations to current and future retirees. Yet most funds’ targeted rates of returns have been set much higher than the actual returns these pensions have been able to earn of late, a situation that will likely result in higher tax contributions by states, reductions of benefits to beneficiaries, or both.

“States have [target return rates] of 7.75 or 8 percent — and they’ve almost all been singularly unsuccessful doing that [rate of return] over the last five years, if not a good deal longer,” Schwarzman said. “So they have very few ways to solve that problem. One way to do it is to invest in higher-return products.”

Schwarzman said this situation was “like a perfect storm,” where his firm is seeing “very large inflows” into almost all types of investments that Blackstone makes.

Carlyle’s Rubenstein said that it’s not just pension funds that are eager to catch up. Individual investors, he said, are also eager to tap into alternatives such as private equity. “Why can’t not-so-wealthy investors get access to these vehicles?” he asked. “They need the higher returns even more than the wealthy people.”

Rubenstein predicted that soon, perhaps within the next five years, the rules prohibiting non-accredited investors from investing in assets like private equity will be relaxed. “Eventually … non-accredited investors will be coming into private equity to a certain extent through their 401(k) programs because eventually there will be pressure on the SEC in Washington.”

The reason investors of moderate means are interested in tapping into alternative investments, said Rubenstein, is that “people who have their money in bank accounts are getting zero interest.” Individual investors, whether extremely wealthy or moderately so, is “where I see the biggest increase in private equity investments … right now.”