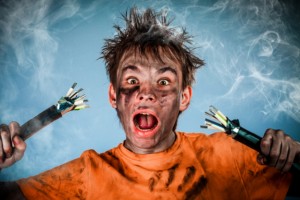 There was a story in the Washington Post a few weeks back that started with this paragraph:

“People, and especially men, hate being alone with their thoughts so much that they’d rather be in pain. In a study published in Science Thursday on the ability of people to let their minds “wander” — that is, for them to sit and do nothing but think — researchers found that about a quarter of women and two-thirds of men chose electric shocks over their own company.”

FYI, those electric shocks were self-inflicted. In a 15-minute period, two-thirds of men chose to light themselves up with a nine-volt current and one-quarter of women did the same. The alternative was to sit there quietly in contemplation with no distraction from the usual suspects: iPhone, TV, whatever.

Wow. No Pain, No Gain, as they say, but to choose self-inflicted pain over being alone with your thoughts is a pretty aggressive way to satisfy that maxim. And it made me wonder. Does the high rate of business failure relate in any way to this fear of quiet self-reflection?

We all know that approximately 80 percent of new business ventures fail and this makes good venture capital returns particularly challenging. Those failures can come quickly or be the result of slow, twisting deaths. Either way, one or two of the companies that get started are left standing five-to-ten years later, depending on which data you believe. YCombinator has said that greater than 90 percent of the companies they accept never go on to create any meaningful value.

The typical reasons oft-cited for start-up failures are lack of access to capital, lack of understanding of customer need, poor product design and bad management. But “bad management” is usually characterized as some combination of lack of experience, poor leadership skills and inability to communicate effectively. Could inability to listen to that inner voice and act accordingly be a key contributor to start-up failure no one has discussed?

According to University of York Professor Jonathon Smallwood, quoted in the Post article, the ability to let the mind wander has been linked to greater working memory and increased creativity. Clearly those are two characteristics that contribute to great leadership, better product creation and the ability to understand one’s surrounding marketplace. The ability to disengage from the melee and engage in self-reflection is, according to Smallwood, a key way “that the human mind escapes from simple reflexive behavior.”

But the entrepreneur culture is an action culture—one where quick reflexes and a go-go mentality are highly prized. Ask any entrepreneur how much time they spend quietly sitting and thinking and they will laugh. They will regale you with stories about how they are working 25 hours-a-day and rarely even take time to pee. What they will not tell you is they routinely spend an hour quietly contemplating their navels to seek deep epiphanies.

Is this because they don’t make the time to do it or are afraid to do it or would rather be self-administering electric shocks in the form of meetings, programming, hiring, fundraising, Twittering, than to sit and reflect?

A key finding of the study in Science was the men were far more likely to choose electric shock over introspection. It is true the vast majority of businesses are started and run by men, but also true that those with mixed gender leadership teams tend to perform better (maybe the women are spending more time thinking and less time self-electrocuting). Perhaps that combination of genders leads to a greater willingness to contemplate and thus improves outcome in a situation where the other variables for success are controlled (e.g, for instance, access to capital).

In relationships of all kinds, women tend to be the ones who want to discuss feelings and contemplate experiences and engage in obsessive self-reflection, often to men’s chagrin. But perhaps when one gets just the right mix of action and reflection, start-up outcomes can improve.
The discovery that it is more valuable at times to slow down and think when every fiber says to act could be the shock entrepreneurs really need. The ability to balance both is a characteristic investors should be looking for when writing a check.

I can see it now: VC’s can excuse themselves from the conference room for 15 minutes and watch through a two-way mirror to see if the pitching entrepreneur is sticking his finger in the wall socket or engaging in deep thought during the intermission. Could this be the predictor of investment success we have all been missing?