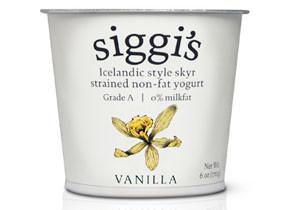 What’s the biggest challenge for Siggi’s Yogurt? How to remain competitive in a crowded market, while providing a healthy alternative to sugar-heavy yogurts typically found in local grocery stores.

So says Siggi Hilmarsson, who founded the company out of his Manhattan apartment in 2005. New York-based Siggi’s produces “skyr”, a type of Iceland yogurt that has two to three times more protein than a traditional yogurt. Siggi’s Yogurt is all-natural and sweetened with agave nectar instead of sugar or corn syrup or honey. Siggi’s is also more expensive, with a 5.3 oz. cup costing about $1.99, while a Dannon All-Natural 6 oz. sells for 79 cents.

But Siggi’s flavored yogurt only has 9 grams of sugar while a plain has four grams. By comparison, a Dannon All -Natural lemon flavored 6 oz. yogurt has 25 grams of sugar. A plain has 12 grams. “Americans eat way too much sugar,” says Hilmarsson, who is a graduate of Columbia Business School. “Yogurt is really healthy. At the same time, some of those health benefits get lost, because you put too much sugar in them.”

The yogurt business, which generates an estimated $4.1 billion in sales, is dominated by players like Dannon and Yoplait. Smaller upstarts Chobani and FAGE, which offer Greek style yogurts, have also gained a following. “Yogurt is a tough category,” says a banker. “There are too many brands and products.”

Siggi’s is currently grappling with how fast to expand. Hilmarsson wouldn’t provide revenue for the company, but Siggi’s employs nine people (plus two interns). Products include drinkable yogurt and the traditional cartons. Siggi’s can be found in grocery stores like Stop & Shop, Whole Foods and the Fresh Market

So far, Siggi’s has done two rounds of funding. A friends & family round, which included funding from a Columbia Business School professor, closed in 2007. In 2010, Revelry Brands, the investment firm from Brendan Synnott who co-founded Bear Naked (it was sold to Kellogg Co.), bought a minority stake in Siggi’s. The yogurt company may look to raise another round of funding this year, Hilmarsson says.

“I don’t really need to do it,” he says of the possible fundraising. “The question is do we want to grow faster? Then we might do it.”