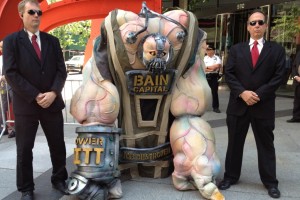 About 50 demonstrators gathered in mid-town Manhattan Thursday to protest Bain Capital and its co-founder Mitt Romney, who formally accepted the Republican nomination for President last night.

Standing in front of Bain’s offices on 57th and Madison Ave., the protesters detailed what they believe the U.S. economy would look like under a Romney administration. Several tourists stopped to watch the protest.

The protesters called for a higher federal minimum wage, an end to tax breaks for the rich and corporations, and a focus on creating jobs (not layoffs or outsourcing for profit). The protesters chanted, in English and Spanish, “What do we want? Justice. When do we want it? Now.”

This reporter attended the event hoping to speak to current or past employees of Bain portfolio companies. I spoke to several people, but only found one person who worked for a Bain company: Shantees Jones. Jones said she used to work for Burlington Coat Factory, which is owned by Bain. She says she was laid off roughly a month ago from her part-time job at Burlington, because she “was fighting for her rights.”

Cara Noel, a spokeswoman for UnitedNY, which sponsored the protest, says more employees of Bain portfolio companies weren’t present because they were working. “There will be more Bain employees at the Watch party tonight,” she said.

UnitedNY also unveiled a “super villian,” which they called the “Bain Capital Job Destroyer.” The 15-foot-tall puppet (or guy in a big rubber costume) was named after Bain, the buyout shop co-founded by Romney. (There were also many Batman references, since Batman’s nemesis in “The Dark Knight Rises” is called Bane).

“Bain the Job Destroyer” spoke to the “Gotham” audience about his proud past with “partner-in-crime, Mitt Romney.”

Click through the slideshow to see what “Bain” had to say.

—Mike Scorelle contributed to this report 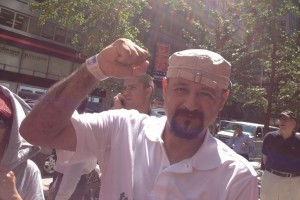 Felipe Idrodo works for a cleaning company called Capital. Capital is not owned by Bain, but Idrodo says he is protesting Bain because he is fighting for workers’ rights and better wages. 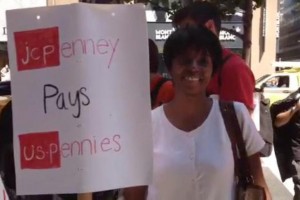 This is Leonnie Bennett criticizing J.C. Penney. J.C. Penney is not owned by Bain and Leonnie says she doesn’t work for J.C. Penney. She does support UnitedNY, which organized the protest. 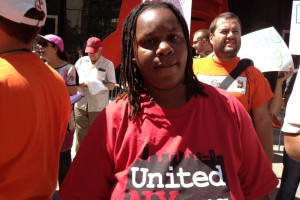 Shantees Jones tells peHUB she used to work for Burlington Coat Factory, which is owned by Bain. She says she was laid off roughly a month ago because she “was fighting for her rights.”

Jones was earning $8 an hour at Burlington, which she says is not enough to support her family of three kids. Later, she admitted that she worked for Burlington for about two months and her position was part-time, UnitedNY’s Noel says. 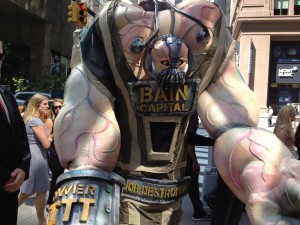 So-called “Bain Capital Job Destroyer” told the crowd that he and Mitt Romney go way back.

“For years The Romney and I were a great team,” he said. “Together we slashed paychecks, gutted the workforce, busted unions and killed jobs by the thousands!” 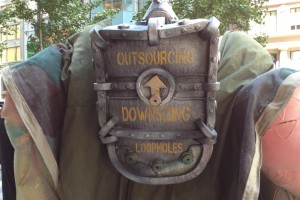 As”Bain Capital Job Destroyer” was talking about his auspicious plans, peHUB snuck a look at his backpack. Notice that “outsourcing” is placed in the top position.