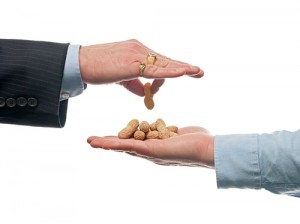 Nearly every day for the past month, I’ve read a column about compensation. Almost every publication has something to say about whether pay is rising or falling, whether bank and private equity bonuses are too much and at least half a dozen different firms are hawking their compensation studies, charging thousands of dollars. The result is that most everyone wonders, “Am I getting paid what I’m worth?”

The number of calls we’re getting from candidates asking about compensation is on the rise. Every year, the issues surrounding compensation seem to escalate from a hum in September to a roar by December. This year is no exception, but I wonder why it isn’t.

To me, there seems to be a disconnect between compensation anxieties and reality — especially for those who are employed.

This time last year, the world of compensation as we knew it seemed to be collapsing. Layoffs were happening everywhere you looked. There was anxiety about whether you would even have a job, let alone get a raise or a bonus. Everyone knew that getting to keep your job was your bonus. What, really, has changed in our industry in the past 12 months to justify the chatter about increased compensation?

Honestly, not much. Even a cursory review of the year demonstrates that neither the number nor size of funds raised this year has increased over 2008 levels. Ditto for deals – not much in the way of dealflow, deals done or successful exits. There has been talk of “green shoot” sightings, optimism that the credit markets are beginning to loosen and some modest increases in hiring at firms that have been able to raise new funds. And, yes, Goldman prematurely (foolishly, in my opinion) announced that it was setting aside great chunks of money for 2009 bonuses.

But, look around, the housing market is still lethargic (at best), consumer spending hasn’t returned to 2008 levels and unemployment is at its highest level in 26 years. There are still millions of unemployed people everywhere – yes, even in banking and private equity. Yet somehow the undercurrent whispers that everyone should be expecting raises and bonuses this year.

It occurred to me that most of us don’t know the difference between “salary” and “bonus” since it’s become so entangled in recent years.

A “salary” is “money paid for work done” while a “bonus” is defined as “an unexpected extra, a commission, a share of a profit”.

As a country, and as an industry, we have become addicted to the notion of annual raises, without regard to whether our performance merited such raises. Somehow, over the years, the word “bonus” came to be synonymous with deferred salary, but for most professionals there are no more guaranteed bonuses. Those who have come to count on their bonus as a reliable part of their salary need to readjust their thinking and their expenses. Sorry to throw a bucket of cold water in your face, but if you’re thinking of asking for a raise, or negotiating for a higher bonus this year, here are some questions you’d better ask yourself first:

Is there more money? Did my firm have tangible, measurable economic success this year? Did we make more profit this year than last? What losses did we incur last year that might be a drain on this year’s net profitability? Taking those losses into account, did my firm make more profit this year? If so, read on. If not, stop thinking about asking for a raise and start working on a strategy for your resume, your odds of job loss are higher than you think.

Did I ‘earn’ an increase? What did I, personally, contribute this year to the profitability of my firm? Is it something that only I am responsible for or are others in the firm partially responsible for that profitability? If so, what are our relative contributions? Can my contribution be made by someone else in the firm (or outside the firm)? If you can quantify specific, tangible things that ONLY YOU could provide to the firm that directly enhanced its profitability, read on. If what you did either did not contribute to the firm’s profitability or could be done by someone inside or outside of your firm, dry yourself off from the splash of cold water and focus on what you CAN do to become the most valuable player to your firm by this time next year.

What’s my future? What, specifically, can I, personally, contribute to the profitability of my firm in the coming year? Can anyone else make that contribution instead of me? Outline the specific actions that you are prepared to undertake to help move your company to profitability next year and use them as benchmarks you can set with your employer to be judged on for your bonus for 2010, when you achieve that profitability.

Why am I here? Was I content in my job before I saw a compensation study of “averages” (or heard from a buddy that I was being underpaid) that made me think I should make more money? Why am I working at this specific company, anyway? Do I like the people here? Do I find the work enjoyable? Can I quickly get another job doing this work in this market at this or greater pay? How did my sense of value come to be equated only in dollars? How much is “enough”?

I think it’s interesting that firms typically think of their employees as “Human Resources.” Gifford Pinchot was the first Chief Forester for the United States. He had a view of the forests as resources to be deployed through a measure he called “The Greatest Good for the Greatest Number.” John Muir, famed conservationist, retorted: “Much is said on questions of this kind about ‘The Greatest Good for the Greatest Number’ but the greatest number is too often found to be the Number One.”

I’m all for enhanced compensation, but I fervently believe that it must be earned and it must take into account The Big Picture. If you are employed at a private equity or venture capital firm and your firm didn’t raise a new (and larger) fund, where exactly do you suppose the additional money for your raise or bonus is going to come from? If the investment bank you work at didn’t do more (and larger) deals than last year, then it likely doesn’t have more fee income to use for your raise or bonus. If your firm suffered losses last year, it likely has to make those up this year. And, if you weren’t a significant contributor to the profitability of your firm, why do you feel safe demanding more compensation just because a compensation study compiling “averages” in the industry says on paper that you “deserve” it?

Averages are virtually meaningless in determining compensation for a particular employee at a particular firm and, after all, no one thinks they are simply “average”! Are you, as John Muir supposed, thinking that the Greatest Good is only for Number One?

The Big Picture is that there are still lots of talented candidates who would gladly swap their situation with yours and employers will demand concrete examples of how you have earned that raise you’re planning to bang the table for or they can (and probably should) swap you out.

The even Bigger Picture is that the amount each of us makes in this industry dwarfs the earnings of nearly all Americans. According to The New York Times “the average weekly pay of rank-and-file workers (who make up 80 percent of the work force) remains stuck at about $612”. By my calculation, that’s an average of $31,824/year for 80% of Americans. I was reminded of the difference between “can’t” and “won’t” when I heard a candidate complain that he “Can’t possibly make ends meet on only $170,000 base”. I wondered, should I ask my client to help sponsor his food stamp application?

Seriously, let’s let a little reality shine in on the question of compensation and whether your only real “worth” is based on a larger sack of shiny coins.

Denise Palmieri is the Director of Client Relations for Pinnacle Group International, an executive recruiting firm specializing in recruiting investment professionals for private equity, venture capital and boutique investment banking firms from the Analyst to the Partner levels. Reach Denise at dpalmieri@pinnaclegroup.com