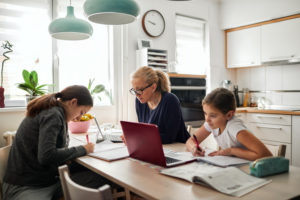 Tech Tuesday. The practice of working at home, in the office and on the road certainly pre-dates covid, but the pandemic accelerated adoption of what we now call hybrid work quite dramatically.

Earlier this morning, tech-focused PE firm Thoma Bravo announced the formation of a new company that develops software “to power the modern workplace,” as the press release puts it.

The PE firm, which has offices in Chicago, London, Miami and San Francisco, is merging Condeco, a developer of workspace scheduling software headquartered in London, and iOffice + SpaceIQ, a workplace and asset management company based in Atlanta, to create a new company called Eptura, which will be headquartered in Atlanta. The company name is intended to evoke “the epicenter of the future at work.”

“With the proliferation of hybrid work, there is an unmet need for technology solutions that enable businesses to adapt to the changing needs of the workplace,” said Brandon Holden, CEO of Eptura, in the press release. “By combining the power of our expertise and products, Eptura provides a comprehensive solution for business leaders who recognize the importance of keeping people at the center of the workplace of the future.”

The merger follows previously announced investments in Condeco and iOffice + SpaceIQ by Thoma Bravo and JMI Equity, which will remain the primary investors in Eptura. Terms of the transaction were not disclosed.

Eptura has been in the works for more than a year, Thoma Bravo senior partner AJ Rohde told CNBC.

“This is not your garden-variety, plain-vanilla private equity deal in software,” he said. “This is a lot of market work, a lot of belief in a market.”

He continued: “The companies were all good products but subscale. Now, the company is very big. … The companies were maybe slightly more regionalized, and maybe more … one-solution focused, now we have a platform.”

Obey spoke with Jonathan Zeidan, an operating partner with Alpine who serves as Axcel’s chief executive, in an exclusive interview.

Zeidan said there is a growing demand for professional education.

Founded in 2004 by Radhika Dega and Vinod Dega, who are married, EduMind is based in Dublin, Ohio, and Chennai, India. The company’s original goal was to provide comprehensive training courses that help students prepare for the Fundamentals of Engineering and Professional Engineer exams. The company has since expanded to include other professions, such as architecture, project management and nursing, among others.

Other companies in the Axcel platform include Michael Management Corp., a provider of training for SAP enterprise software; Web Age Solutions, an IT training company; and Interskill Learning, a provider of online mainframe training.

“We believe there is significant opportunity for Axcel businesses to grow independently as well as the opportunity to build a family of businesses that are stronger together than they are apart with some of the resources that we can bring to the table,” Zeidan said.

In mid-August, the Stockholm-based PE firm announced that a consortium led by Accent Equity 2017 fund had agreed to acquire Inteno Group from Accent Equity 2012 and several minority shareholders.

Also headquartered in Stockholm, Inteno is a developer and provider of fiber products, powered by an open-source operating system and software platform. The group’s product and software offerings include Wi-Fi routers, gateways and extenders, mesh systems, and fiber termination units for home IoT devices.

“The fiber rollout in Europe is at very different maturity levels,” Winberg explained. “In the Nordics, fiber is well established, whereas other markets are very much in the early rollout phase.”

Accent plans to target these early-stage countries during its new hold period of Inteno.

IR Forum. Nina and others from the PE Hub Europe team, including Craig McGlashan and David Wansboro, will be at Private Equity International’s Investor Relations, Marketing & Communications Forum: Europe in London tomorrow and Thursday.

If you’re heading there too, drop Craig a note at craig.m@peimedia.com if you’d like to meet up.

Check out the daily Dealflow newsletter, which covers all things PE-deal related in Europe.

That’s all for now. Buyouts’ Chris Witkowsky will be on duty tomorrow with the Wire, and I’ll be back on Thursday.

For those observing Yom Kippur, I hope you have an easy fast.