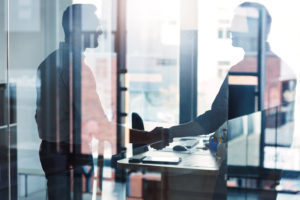 Despite the hot deal market everyone is going on about, it’s a slow news day on the PE-backed M&A front. But we do have news of big C-suite reshuffle from one private equity giant. Jim Coulter, one of the founders at TPG, stepped away from his role as co-chief executive, leaving Jon Winkelried as the sole CEO.

Coulter is shifting focus to the impact investing business and will become executive chairman at the firm. Particularly, he plans to lead TPG’s Rise Climate fund, which was raised alongside former US Treasury Secretary Hank Paulson.

Winkelried, the now-CEO, will take care of the day-to-day operations. The ex-Goldman banker has been co-leading TPG since 2015 and joined the buyout firm after a 27-year stint at the bank where he rose to president and co-chief operating officer.

The firm said the leadership shuffle won’t change the future of TPG. “We look forward to continuing to benefit from their leadership and experience as they divide their responsibilities in this new way,” said David Bonderman, co-founder of the firm who is continuing in his role as the chairman.

TPG’s latest trasition has come against the backdrop of some major leadership moves by other buyout firms. Apollo Global Management’s co-founder Leon Black retired as CEO earlier this year and relinquished control to Marc Rowan. Vista Equity Partners made changes to its fund leadership naming Rachel Arnold as co-head of the small-cap Endeavor fund, and Patrick Severson as co-lead of the middle-market Foundation fund. The two replaced Alan Cline and Rob Rogers, who moved into advisory roles.

Read the brief on PE Hub.

The brand became a part of TSG’s portfolio in 2017, and since then has expanded into additional product categories and channels, according to the press release.

Roundhouse Collective, a venture capital firm investing in early-stage consumer companies, was also part of the 2017 funding round. Prior to TSG’s minority investment, Nuun had raised venture funding from Alliance of Angels in 2010, according to PitchBook data.

Based in Seattle, the company develops electrolyte drinks, hydration tablets and vitamins and markets them to sports professionals, cycling athletes. Nuun sells its products at outdoor specialty stores and retailers like Walgreens.

Houlihan Lokey acted as the financial advisor to the sell-side. Read the brief on PE Hub.

Wine Potential: Incline Equity Partners announced its investment in wine importer and distributor, The Mad Rose Group, marking its second bet in the wine sector, having owned The Country Vintner from 2008 to 2011.

Based in Brooklyn, Mad Rose provides access to a diverse book of over 140 wine producers to off-premise retailers, restaurants and third-party distributors across the United States, according to the press release on PE Hub.

That’s it for today! Have a great week ahead, and as always, write to me at karishma.v@peimedia.com with your tips, comments or just to say hello!