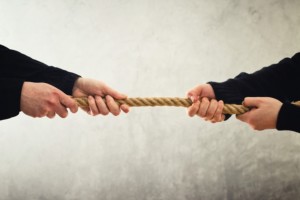 Two global private equity giants are set to face off in a battle for Australia’s Treasury Wine Estates Ltd (TWE.AX) after TPG Capital Management LP [TPG.UL] matched a $3.1 billion move from KKR & Co LP (KKR.N) for one of the world’s biggest wine makers.

A week after KKR teamed with Rhone Capital LLC to propose a A$5.20 a share offer for Treasury, the owner of the Penfolds, Lindemans and Wolf Blass brands said on Monday it received a second identical approach from a global private equity firm which requested anonymity. [ID:nL4N0QA2RU]

The buyout firm behind the second proposal for a firm that expects massive writedowns from problems in U.S. and China operations was TPG, a source with direct knowledge of the matter told Reuters. Treasury declined to comment further on the second bidder’s identity but said it was opening its books to both suitors for due diligence.

By lodging an offer that matches KKR’s, TPG ensures it gets a first-hand look at the confidential financial details of the company that attracted its rival in the first place. While the pair could yet withdraw interest after due diligence, the prospect of competing bids by two of the world’s biggest private equity investors sent Treasury’s shares 4 percent higher to close at a year high of A$5.33 – above the indicative offer from both parties and valuing the target at about $3.21 billion.

“It’s highly probable that a deal gets done now that there’s two of them,” CLSA analyst David Thomas said. A private equity purchase of Treasury up to A$5.80 a share, or A$3.77 billion, “stacks up”, Thomas said.

“There’s been some pretty difficult periods for the business but if you look at where the earnings have come from there is clear value locked away there, which either the current team or private equity, through some level of a break-up, could crystallize,” said Thomas.

The skirmish for Treasury comes as mergers and acquisitions activity in Australia booms, driven by takeovers by overseas players. Australian M&A deal volume jumped to $81.1 billion so far this year, making it the biggest year for deal activity since 2011, according to Thomson Reuters data.

Treasury has been viewed as ripe for a takeover since late 2013. The world’s second-biggest wine supplier by volume sales reported profit slumped 38 percent in the six months ended February, with warnings of more pain to come.

But until last week the company held that its best course was to stick to a turnaround plan under new chief executive, Mike Clarke. In May, the company said it had turned down a A$4.70 a share, A$2.9 billion approach from KKR.

The company is scheduled to release full-year results on Aug. 21 that are expected to highlight the impact of oversupply in its U.S. operations and dwindling China sales because of a government crackdown on luxury gifts, as well as early effects of Clarke’s efforts to turn the firm around.

According to CLSA analyst Thomas, a sale involving a trade buyer could conceivably value Treasury up to A$7 a share, or A$4.5 billion, because of shared production costs, revenue and other synergies.

However Treasury’s willingness to engage with KKR and Rhone based on a A$5.20 a share offer signaled the level at which the wine maker would consider discussing a takeover.

While KKR-Rhone and TPG have made identical proposals, they are likely to emerge from due diligence with markedly different proposals from which Treasury’s board will then choose the stronger one, they added.

Treasury is allowing both private equity rivals to do due diligence simultaneously in the hope of speeding up the process. CEO Clarke is keen to have the matter resolved quickly so it isn’t a distraction, a Treasury spokesman said.