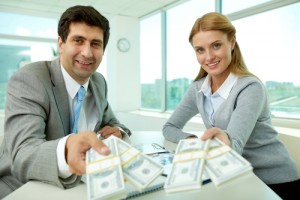 Welcome to Silicon Valley, where a shortage of top engineering talent amid an explosion of venture capital-backed startups is inflating paychecks.

“The number of A-players in Silicon Valley hasn’t grown,” said Iain Grant, a recruiter at Riviera Partners, which specializes in placing engineers at venture-capital backed startups. “But the demand for them has gone through the roof.”

Stories abound about the lengths to which employers will go to attract engineering talent — in addition to the free cafeterias, laundry services and shuttle buses that the Googles and Facebooks of the world are already famous for.

One startup offered a coveted engineer a year’s lease on a Tesla sedan, which costs in the neighborhood of $1,000 a month, said venture capitalist Venky Ganesan of Menlo Ventures. He declined to identify the company, which his firm has invested in.

At Hotel Tonight, which offers a mobile app for last-minute hotel bookings, CEO Sam Shank described staging the office to appear extra lively for a prospective hire. He roped in two employees for a game of ping-pong and positioned another group right by the bar.

It worked: The recruit signed on and built a key piece of the company’s software.

In Fry’s case, his compensation came mostly in the form of stock awards, valued last year at $10.1 million, according to Twitter’s IPO documents registered with securities regulators. He drew a salary of $145,513 and a bonus of $100,000.

Some might call that underpaid. Facebook Inc’s VP of engineering, Mike Schroepfer, took in $24.4 million in stock awards the year before the social network’s 2012 initial public offering. He also drew a salary of $270,833 and a bonus of $140,344. But Facebook that year posted revenue of $3.71 billion, 10 times more than Twitter’s $317 million.

Grant said more than three-quarters of candidates who took VP of engineering roles at his client companies over the last two years drew total cash compensation in excess of $250,000. Many also received equity grants totaling 1 to 2 percent of the company, the recruiter added.

The hot demand for engineers is driven in part by a growing number of startups, venture capitalists say. Some 242 Bay Area companies received early stage funding — known as a seed round — in the first half of this year, according to consultancy CB Insights. That is more than the number for all of 2010.

Another factor is the increasing complexity of technology. Many in Silicon Valley like to discuss the lore of the “10x” engineer, who is a person so talented that he or she does the work of 10 merely competent engineers.

“Having 10x engineers at the top is the only way to recruit other 10x engineers,” said Aileen Lee, founder of Cowboy Ventures, an early stage venture fund.

Former colleagues said Fry, who joined Twitter earlier this year, fits the bill. The messaging service poached him from software giant Salesforce.com Inc, where Fry had worked in various positions since 2005, rising from engineering manager in the Web Services team to senior VP of development.

Perhaps most attractive to Twitter is the fact that Fry joined Salesforce when it was also a 6-year-old company with big ambitions of taking on the software establishment. At that time, Salesforce’s product development needed help, Fry has said in previous interviews. He whipped them into shape, helping build the company into one of the hottest enterprise-software providers in the industry today.

Twitter has had its share of technical problems, such as the notorious “fail whale” that regularly appeared on screens during outages. That made Fry’s experience all the more valuable.

“All it takes is a couple of bad incidents where Twitter is down, or there’s a security breach. That could be the end of the company,” said Chuck Ganapathi, an entrepreneur who previously worked with Fry at Salesforce, where he was senior vice president for products.

“You need somebody of this caliber to run it.”

Today, even entry-level engineers can draw lucrative salaries in the Valley. Google Inc offered $150,000 in annual wages plus $250,000 in restricted stock options to snag a recent PhD graduate who had been considering a job at Apple Inc, according to a person familiar with the situation.

The average software engineer commands a salary of $100,049 in Silicon Valley, according to Dice, a technology-recruitment service. That is down from $113,488 last year, due to an increase in hiring of less experienced engineers, said a Dice spokeswoman.

By comparison, the average salary for all professions in San Francisco’s Bay Area is $66,070, according to the Bureau of Labor Statistics. Other jobs in the area can command higher wages — physicians make $133,530, a lawyer about $174,440 and a civil engineer makes $107,440 — but the tech industry often offers restricted stock or options on top of salaries.

Even for plain-vanilla engineers, competition is intense, said Dice CEO Mike Durney, leading companies to go to great lengths to attract and hold onto the right people.

In one of the better-known examples, Google famously allowed engineers to devote 20 percent of their time on personal projects. It is worth it, many recruiters and industry executives say.

Many of the most talented engineers bring more than programming chops, promoting the sort of career diversity prized in Silicon Valley.

Take Fry, who earned a PhD in cognitive science from the University of California at San Diego in 1998. He is a surfer, a sailor and a snowboarder, according to his personal website.

In a fitting twist for Twitter, known for its blue bird mascot, Fry also has avian expertise. His postdoctoral fellowship at the University of California, Berkeley, focused on the auditory cortex of zebra finches.