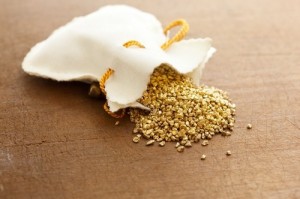 Eagle Hill Exploration Corp., a Vancouver-based mineral exploration company, said Thursday that it has completed a $12 million private placement with Southern Arc and Dundee Corp. Under terms of the transaction, Southern Arc invested $7,324,050 to acquire 97,654,000 units of Eagle Hill at a price of $.75 per share. Dundee Corp. invested $4,675,950 to acquire an additional 62,346,000 shares of Eagle Hill, increasing its ownership stake in Eagle Hill from 18.8% to 26.14%. Headquartered in Vancouver, Southern Arc Minerals is a mineral exploration company focused on gold and copper-gold exploration. Dundee Corp., which is based in Toronto, is a holding company that includes among its subsidiaries, Goodman & Company and Investment Counsel.

VANCOUVER, BRITISH COLUMBIA–(Marketwired – Aug. 15, 2013) – Southern Arc Minerals Inc. (TSX VENTURE:SA)(OTCQX:SOACF) (“Southern Arc” or “the Company”) is pleased to announce that it has received shareholder approval to complete a strategic investment and acquire a 26.14% interest in Eagle Hill Exploration Corporation (“Eagle Hill”) (TSX VENTURE:EAG), as previously announced on July 11, 2013. Southern Arc invested $7,324,050 to acquire 97,654,000 units of Eagle Hill by way of private placement at a price of $0.075 per unit. Each unit comprises one common share of Eagle Hill and one half share purchase warrant, with each whole warrant entitling the holder to acquire a further common share of Eagle Hill at a price of $0.10 per share for a period of four years. Should Southern Arc choose to exercise all of its warrants, the Company would hold a 30.74% interest in Eagle Hill on a fully diluted basis, and be the company’s largest shareholder.

Following Eagle Hill’s annual general meeting and Board meeting, the Eagle Hill Board of Directors comprises five directors: John Proust – Chairman, Dr. Michael Andrews, David Christie, Carl Calandra and Robert Parsons. Bradley Kitchen and Gerald Ruth have stepped down from the Board. Mr. Kitchen and Mr. Ruth have been Eagle Hill directors since 2006 and 2010, respectively, and their contributions are appreciated.

Eagle Hill’s Board of Directors promoted Dr. Jean-Philippe Desrochers to the position of Vice President, Exploration. Dr. Desrochers has been overseeing the Windfall Lake property since 2005. He joined Eagle Hill as Chief Geologist in 2010 and has been instrumental in the development of Eagle Hill’s mineral resource. Technical representatives from Southern Arc and Dundee will work with Dr. Desrochers to plan and execute an exploration program for the Windfall Lake Gold Project. Current plans for the property include a $5 million exploration program with the objective of expanding the existing resource. More information regarding exploration and development plans will be provided shortly.

The Eagle Hill Board of Directors will conduct an executive search to permanently fill the positions of CEO, President and CFO.
“Eagle Hill is now well funded, with the technical and business expertise required to unlock the full potential of the Windfall Lake Gold Project,” said John Proust, Chairman and CEO of Southern Arc. “Windfall Lake is exactly the type of property we’ve been looking for. It’s high-grade, has a substantial resource that’s open for expansion, and is located in a well-recognized mining-friendly jurisdiction. We look forward to commencing drilling in September and working with Dundee and Eagle Hill to rapidly developing the property.”

On behalf of the Board of Southern Arc Minerals Inc.
John Proust, Chairman & Chief Executive Officer

About Southern Arc Minerals
Southern Arc Minerals Inc. is a Canadian mineral exploration company focused on gold and copper-gold exploration. The Company’s key exploration property is its West Lombok project, with several gold-rich copper porphyry and epithermal gold vein prospects. Southern Arc is listed on the TSX Venture Exchange under the symbol SA and on the OTCQX International under the symbol SOACF. More information is available at www.southernarcminerals.com or by emailing info@southernarcminerals.com.

About Dundee Corporation
Dundee Corporation is a Canadian holding company listed on the TSX under the symbol “DC.A”. Through its operating subsidiaries, including Goodman & Company, Investment Counsel Inc., Dundee is engaged in diverse business activities in the areas of its core competencies, including investment advisory, corporate finance and private equity investment in real estate and infrastructure, energy, resources and agriculture. Dundee holds, directly and indirectly, a portfolio of investments mostly in these core areas, as well as other select investments in both publicly listed and private companies.